Sagittarius Horoscope for September 2016 predicts that there will be radical changes in family and relationships. There will be turbulence in the family but all conflicts will have to be sorted out. This requires plenty of emotional strength. There may be disturbances from the neighborhood.

Sagittarius, your job environment will be subject to dramatic developments. There may be job or business changes and the organization may undergo major overhaul. This may impact your friendships and social groups to which you belong. 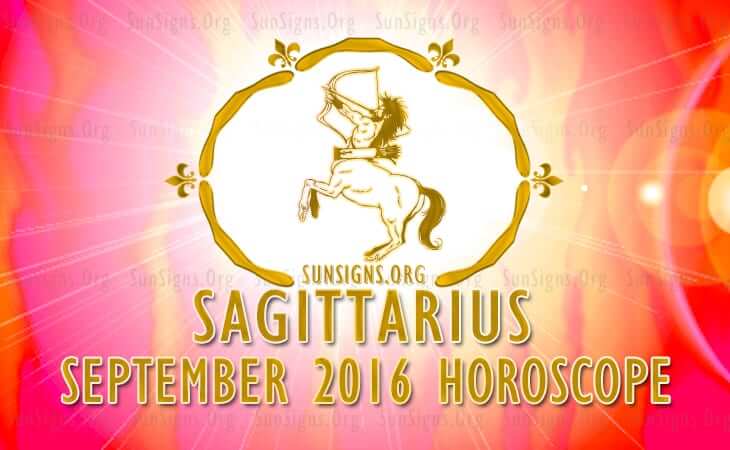 The Sagittarius 2016 September astrology forecasts suggest that your House of Career is extremely robust and the Family and Home planets are in retrograde. You are at lifetime peak of your career by end of September 2016.

Your career success will automatically enhance your social circle. You will enjoy the company of your friends and their activities. Your spouse will be interested in the development of your business too.

Monetary situation for the Sagittarius zodiac sign will be wonderful till the third week of September 2016 and becomes more challenging after that.

You will have to put in more effort to earn money and save.

The ruling planet for the Sagittarius born is shifting to Libra and your love life will be much better this month. Love is chasing you and there will be plenty of romance in relationships. Married Archers will have delightful relationships with their spouses in September 2016. Family life will be harmonious with more caring and sharing between couples. This is astrologically an excellent time to get pregnant.

For single Sagittarians, romantic openings are to be found at their workplace or while dating online. You will want influential and powerful partners. After the first week, you should accept your partners as they are and be more accommodative to their viewpoint for enduring relationships.

The Sagittarius September 2016 monthly predictions foretell that health will be fragile till the 22nd and requires more attention. Your metabolism increases drastically after that. During the month, you will be keen on practicing alternate healing methods to boost your fitness.

To conclude, September 2016 horoscope for Sagittarius birthdays predicts major changes on your career and domestic front.