Scorpio Love Horoscope 2015 predicts that the year 2015 will be a fantastic period as far as love and romance is concerned for the Scorpions. You will meet your love partner during the year and the relationship may become permanent. Before getting into serious relationship with your lover, you should be realistic and should not be swayed by emotions alone.

The 2015 Scorpio love forecasts foretell that singles will find their love partners from April 2015 onward. The first few months of 2015 may not result in any romantic friendships. January and February 2015 will result in romantic alliances which are enjoyable but not serious. You will even try dating online.

The months of May and June 2015 may see you craving for serious commitment from your partner which may not happen. This will leave you dejected and irritable during this period. 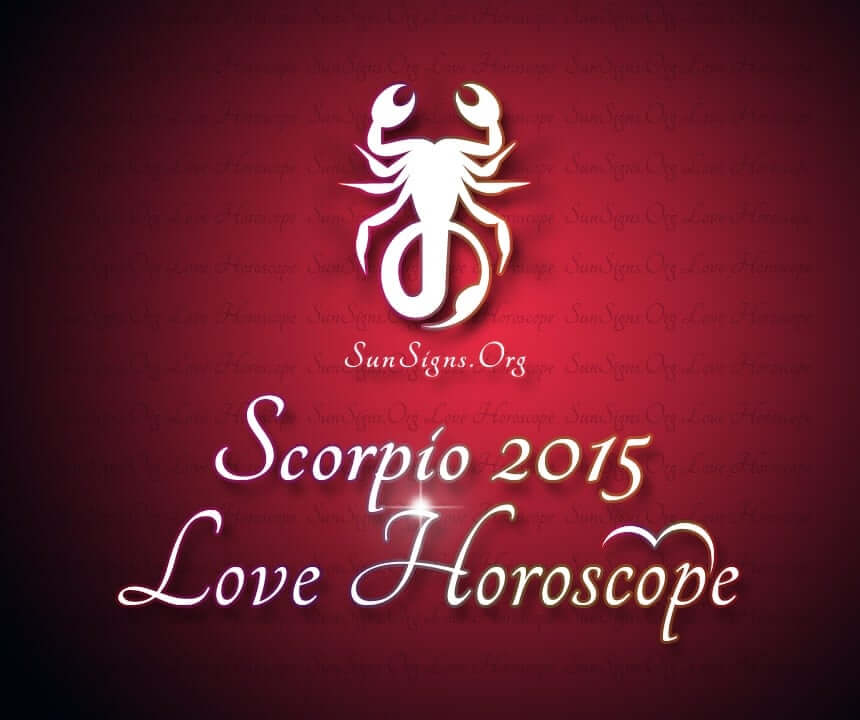 The Scorpio love sex Horoscope 2015 foretells that the first six months of 2015 will be a difficult period for married people. There will be conflicts and differences of opinion between you and your spouse. There is a good chance of a breakup or ending up with a broken heart for the Scorpio zodiac sign if they don’t wake up and act fast.

2015 Marriage Predictions For The SCORPION

The 2015 love horoscope for the Scorpio predicts that the months between August and October 2015 are ideal for wedding between partners who are already in a serious relationship. Scorpio will fall in love with their partners unexpectedly and the relationship will lead to marriage. There is a good chance of announcement of a pregnancy in the family.

The Scorpio sexual astrology 2015 predictions forecast that sexual intimacy and passion in bed will be absent in the third quarter of the year. Your partner will be instrumental in reestablishing the harmony in conjugal life during the latter part of the year. Scorpio couples will have an adventurous life and there will be ample fun and enjoyment.

The Scorpio love horoscope 2015 predicts that you will be compatible with Gemini, Libra, and Aquarius. The Scorpio-Taurus love compatibility or the Scorpio-Leo friendship and Scorpio-Sagittarius relationship should be avoided while getting into romantic liaisons.

The Scorpio Love Horoscope 2015 predicts an exciting and sensual love life in the coming year. Be sure to understand what your partner wants from you instead of being a demanding spouse. Scorpio, do not let your frustrations and anger spoil your love relationships in 2015.