October 2016 Virgo Horoscope predicts that the focus will be on family issues and emotional stability this month. Career is still important, but will be in the background for the Virgo born.

Virgo, majority of the planets are in the eastern half of your natal chart indicating independence and free-will will be required to accomplish your objectives in life.

The middle of October 2016 will result in financial growth for the better and will eliminate all stumbling blocks for the Virgo zodiac sign.

Your monetary strategies will be corrected and a new plan will be in place. Religious and spiritual beliefs will be subjected to transformations.

Virgo, your spiritual life will also be influenced in October 2016 and there will be radical positive changes. People in academic environment will be impacted by the eclipse and important changes are likely. 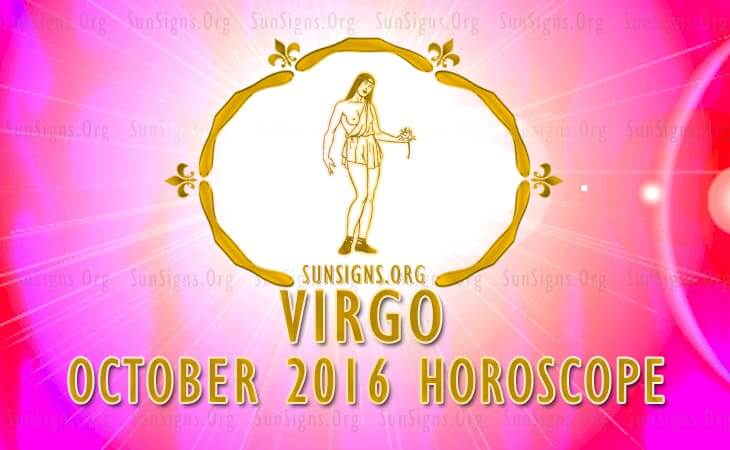 You can decide what you want in your job or profession and follow it up with diligence and persistence.

Though social charm is necessary for success in career, it has a minor role in the growth of the Virgins in October 2016.

The House of Finance is very strong and your finances are at the annual high. The Virgo October 2016 astrology forecasts suggest that your financial acumen will be very good and naturally cash flow will be excellent. Money will come more effortlessly and abruptly. Your spouse will assist you in your financial efforts. You will be able to raise money easily for your ventures.

Speculative ventures will be profitable for the Virgins in October 2016 if undue risks are not taken. Marketing your products intelligently will be the key to your financial success.

Virgo, family members are more unpredictable this month and harmony is disturbed. After the third week, you may change residence or make major alterations and renovations to the house.

Existing relationships with spouse and lovers for the Virgo in love will get better. Single Virgins will have romantic opportunities in financial circles and academic environments. Weak relationships will be swept aside and stronger ones will flourish this month. You will hear news of marriage and pregnancy in the family.

Virgo health is fabulous throughout October 2016. Be sure to make the most of your daily fitness activities and maintain your body shape with ease. Here are some popular winter foods and summer recipes for a healthy diet.

The October 2016 Virgo horoscope presents a month when your emotional quotient will need to be stable in order to achieve success.