October 2016 Horoscope for Scorpio star sign predicts that family issues and psychological stability will become vital and your ambition in life will be tempered by prudence. Career and monetary success will also be necessary for the overall growth in life in October 2016.

Scorpio, with all the power and independence at your command, your way is the highway in October 2016. You have to decide your objectives and follow it up with necessary effort. There will be challenges for the Scorpions, but you can bulldoze them.

Until the end of October 2016, the time is auspicious for religious and spiritual development for the Scorpio birthday. You can engage yourself in spiritual and philanthropic activities. You may be interested in religious meetings and in understanding your inner self.

As you are operating from a higher astral plane, your actions will be mature and profitable. Your intuitive and psychic abilities will be extraordinary in 2016 October.

Scorpio, your spiritual life will see significant changes with respect to your ideas and methods of practice. You may change your ideas about spiritual awakening and chakra balancing. 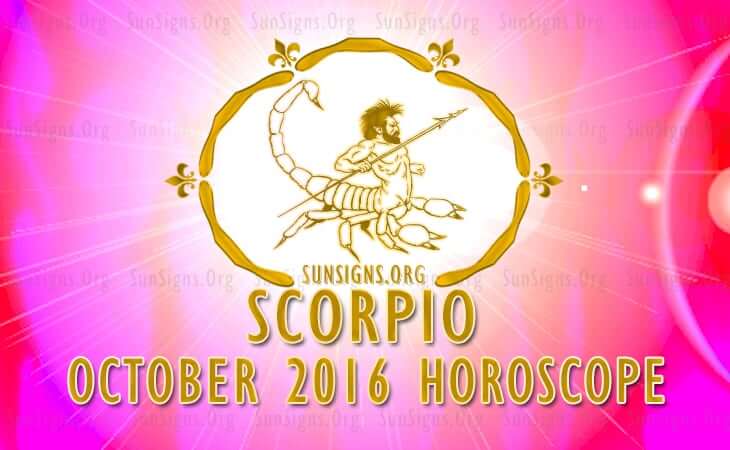 The Scorpio October 2016 astrology forecasts suggest that you can dictate the course of your growth as planetary positions are highly favorable this month.

You should ensure that career and business development will be based on psychological stability and family happiness.

October 2016 for the Scorpio personality will be a great month for financial success and creation of additional wealth.

You are at your financial zenith this month.

October 2016 will be a happening month for the Scorpio when it comes to love, sex and romance. There will be turbulence in your marital or love life.

Weak partnerships will be terminated and stronger ones will become more enduring. Love will be more passionate and can lead to pregnancy. Single Scorpions will have very good romantic opportunities to find the right partner.

The Scorpio health will be amazing due to the planetary power in your star sign. All obstructions to your well being will be blown away in October 2016. Existing illnesses will be cured by home remedies. As your libido is high, you should take care that your sexual excesses will not affect your overall health. Try this sexual astrology calculator to know more.

To conclude, the Scorpio 2016 October horoscope asks you to go slow when it comes to making important decisions this month both in your personal and professional life.