October 2016 Cancer Horoscope foretells that the house of family is very strong this month. Career issues can be kept aside and domestic concerns can be addressed fully.

There is a major movement of the planets towards the social ascendant sign in the horoscope in the month of October 2016 for Cancer born individuals. Self will take a back seat and interests of other people will be important to achieve your life goals. This is a month to get along with others.

October 2016 will bring in major changes in the life of Cancerians such as marriage or change of residence. Your friendships will be put on trial. There will be important changes to the Cancer personality and dress sense. 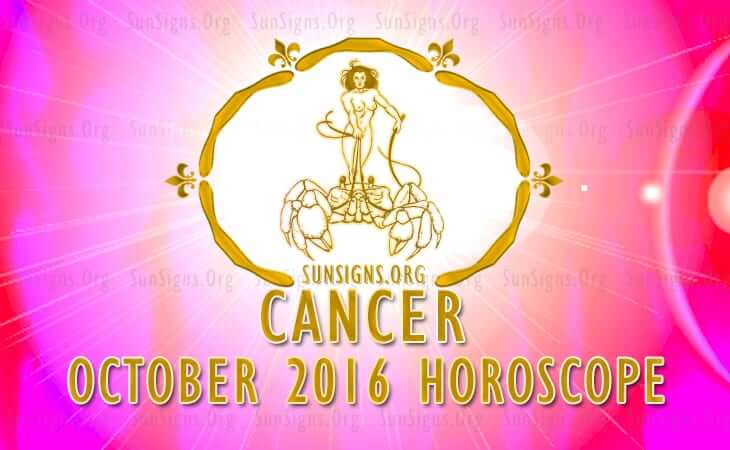 The Cancer monthly astrology forecasts for October 2016 foretell that businessmen will be able to get skilled people for their projects.

Crabs looking for jobs will be successful after the third week.

In October 2016, monetary situation will be under strain and you may have problem funding your social activities. Cancerians must be prudent and restrict expenses. Speculative investments will not be profitable and should be avoided.

The defects in your financial planning will come out and will give you an opportunity to make necessary modifications. Cancer, your family will support your financial efforts.

The monthly October 2016 love forecasts for the Cancer star sign suggests that singles will get many romantic relationships this month. You may find love while chasing your money objectives or among close family circles. Assistance from family members in forming relationships are likely. Marriage is still far away for the Cancerians in October 2016.

Towards October end, dating online will be filled with obstacles. You may veer away from the present relationship and find new pastures. This may become a bone of contention in the present marriage. There may be a conflict between your partner and family members. However love compatibility that is strong will flourish.

Children and their interests will occupy your attention in October 2016. You will enjoy their company and the child in you comes out. A possibility of conception for people of child bearing age is bright.

Cancer fitness and health is wonderful in October 2016. You should not waste your energy on alcohol addiction or smoking. Make the most of your healthy personality.

To conclude, the Cancer 2016 October horoscope foretells that you will concentrate more this month on nurturing your family.