October 2016 Aries Horoscope predicts that from family and psychological concerns, emphasis will change to career and personal achievements. Accomplishment in your profession will lead to delightful family relationships.

The House of Love is very powerful for the Aries personalities in October 2016. Independence and ambitions will be overshadowed by the interests of other people and flexibility. You can accomplish things by collaboration and compromise. This is a good month to form new friendships.

Mid 2016 October will impact both the married life and social activities of the Ram. The turbulence will be positive and will eliminate unnecessary challenges. The end of the month will bring out the defects in your financial strategies and will enable you to make necessary modifications. 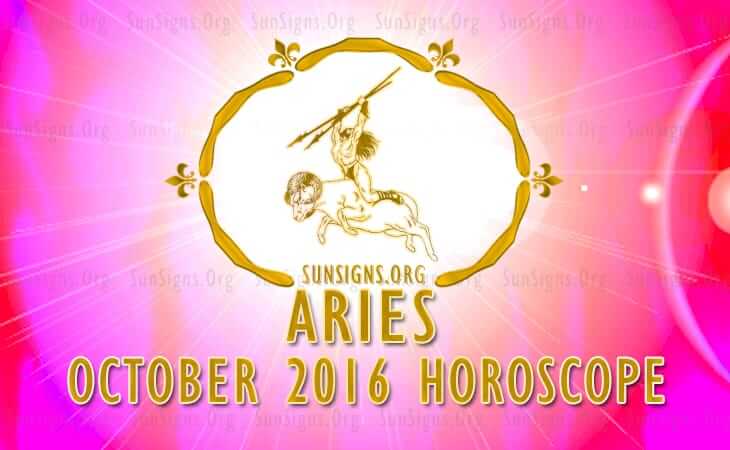 Career development for the Aries zodiac sign in October 2016 depends on their social connections.

You can expect vital improvements in your business towards the end of the month.

The 2016 astrology predictions foretell that financially this is an excellent month for the Arians. Your spouse and social connections will help you in your monetary efforts.

Money can be earned through sales and marketing activities. Your wealth is enhanced indirectly by helping others to be financially successful. Investments in fashion industry and government securities will yield good returns. Surplus money can be used in October 2016 to clear pending loans.

The Aries zodiac forecasts for October 2016 predict that you will be socially active till the third week. Enjoyment will dominate your life. There are good chances of love for single Arians. Romance is passionate and you will find willing sexual partners.

You will even be ready to date all types of people. Committed partnerships are likely towards the end of the month. Love will be idealistic till the then and after that it is more physical, which is a good time to get pregnant.

Health will be a matter of concern for the Aries in October 2016. Your libido will be high but it is not supported by your sexual energy levels. Major changes in your fitness and weight loss routines should be made before end of the month.

The October 2016 Aries horoscope predicts that this will be a rapid and fast month with lot of activities going on simultaneously in your life.