Virgo November 2017 Horoscope predicts that most of the planets are in the Southern sector of the horoscope which makes family and psychological issues more important than career. In addition, the House of Career is very weak and the House of Family will become stronger in November 2017. All your activities should be based on happy feelings and emotional satisfaction is very important.

The November 2017 monthly horoscope for the Virgo sun sign forecasts that by the month end more than 50 percent of the planets will move from the East to the Western half of the chart. Thus there is a transition from autonomy and strong actions to collaboration and consensus. You will need others support to attain your goals. You have to be flexible in your approach and adapt yourself to situations in November 2017.

Planets are favorable for Virgo students and people in the educational field. They will make excellent progress depending on the effort they put in November 2017. 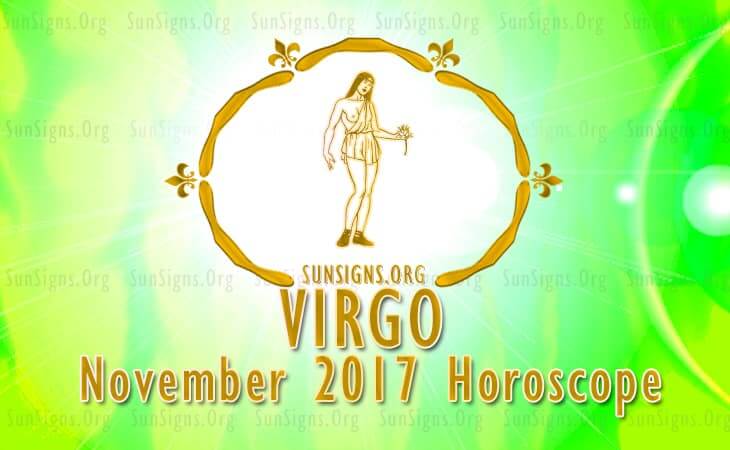 The horoscope 2017 prediction forecasts that professional ambitions for the Virgo personality take a back seat this month. The focus is on family issues and emotional stability for the Virgins.

The November 2017 astrology forecasts foretell that the Virgo monetary situation is excellent. You earn money through speculative activities or when you are on a pleasure trip. Speculations should be based on proper analysis and good judgement. Your financial intelligence is very good and you know how to use it for becoming more prosperous in November 2017.

The 2017 love horoscope also predicts that November 2017 is a favorable month for love. Single Virgins will meet their love partners and form alliances throughout the month. Love is to be found in academic settings, in the office, or in the vicinity of your residence.

You will have the encouragement and support of family members in beginning new romantic partnerships. Here are a few Virgo dating tips. Married couples live in harmony and will have many opportunities to socialize. The Virgo compatibility in marriages will be excellent which might lead to pregnancy in November 2017.

The Virgo health will be good till the 22nd of November 2017 and requires more care after that. You should give importance to your emotional health to enhance your physical fitness. Do not ignore ailments like gum pain and dizziness.

The November 2017 Virgo horoscope predicts a month of fluctuating emotions that might affect your career and domestic life.