Libra November 2017 Horoscope forecasts that more than 70 percent of the planets are in the Southern sector of the horoscope towards the midheaven sign. The House of Family will become dominant after the 5th and the House of Career is weak.

Hence family and psychological concerns will be in focus this month for the Librans. You should establish harmony in the family atmosphere which will improve your emotional strength in November 2017.

The November 2017 zodiac predictions foretell that planetary power is located in the Eastern half of the chart towards your rising sign. You can use your autonomy and self-will to create your own world. Libra, you are not dependent on others and there is no need to make compromises in November 2017. 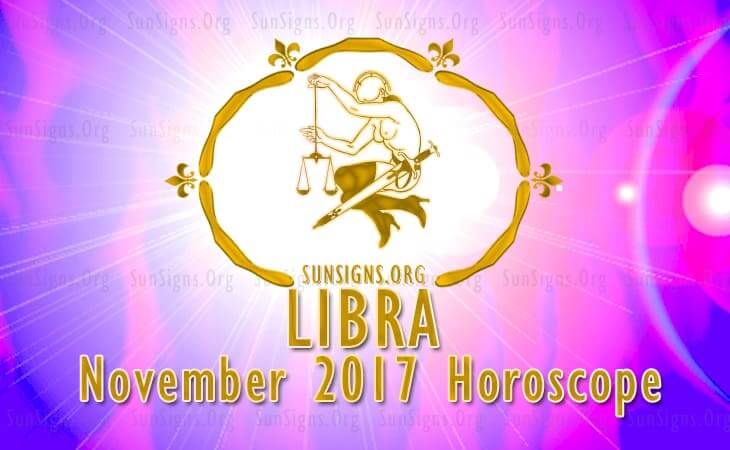 The 2017 horoscopes predict career for Libra zodiac will be in the background in November 2017. You should use this peaceful period to visualize about your professional future and make plans to make them a reality. Career and business related decisions will be subject to major transformation.

The November 2017 Libra astrology forecasts suggest that finances will be on the center stage this month. Earnings will be fabulous as planetary influences are favorable. You can boost your finances through trading, communication and sales promotion. Impact of Jupiter and Pluto will help you to become prosperous by using your creativity in November 2017.

Libran business ventures dealing with writing and other activities requiring imagination will be profitable. All major monetary decisions should be taken after the 15th of November 2017.

Strong Libra relationships will flourish while the weak ones will wither. You are aggressive in love and are looking for soul mates who match your financial aspirations and kindness. Love is more passionate this month for the Libra man and Libra woman. Married couples will discuss pregnancy related issues in November 2017.

The Libra health does not pose any problems in November 2017. You will indulge in lot of pleasurable activities and life in general will be blissful. Here are a few remedies to prevent inflammation and heart burn.

The November 2017 Libra horoscope predicts a period when your family will need your attention more than your career.