Capricorn November 2017 Horoscope forecasts that the planetary strength exists in the Northern sector of the horoscope this month. Though Career should be important and dominate over family and psychological matters, the emphasis is shifting gradually towards family as the House of Career has no planets in it in November 2017.


The 2017 November astrology predictions foretell that more than 70 per cent of the planets are in the Eastern half of the chart for the Capricorn zodiac. Your self-will and bold actions will help you accomplish your targets.

You are not bound by situations and have the strength to change the situations to your advantage. Social skills are helpful but not necessary and there is no need to make any compromises in November 2017. 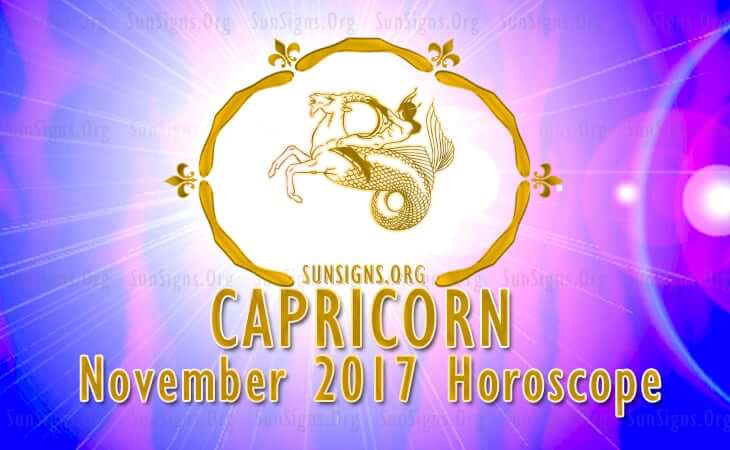 The Capricorn birthday horoscope for November 2017 warns that it is advisable to complete existing projects and to look for emotional satisfaction. The Lunar Eclipse of the 29th of November 2017 will impact your professional life and there will be temporary changes in your business status.

The November 2017 monthly forecasts foretell that monetary prosperity will be excellent this month for the Capricorn man or Capricorn woman. This is due to the forward motion of the Financial Planet Uranus on the 16th of November 2017.

The 2017 predictions forecast that Jupiter also has favorable influence on the Capricorn financial matters. Your financial intelligence is fabulous and you are clear about your goals to make money. You have the support of friends and monetary organizations in your ventures. Investment in technology and communication businesses will be profitable for the sea goats in November 2017.

The Capricorn November 2017 monthly predictions suggest that with the presence of Venus in Capricorn sign, the focus will be on fun and beauty. Your personal charm is excellent and magnetism is high. Money will be spent on buying stylish dresses and ornaments to go with them in November 2017.

Capricorn, you will have plenty of opportunities for forming romantic alliances in November 2017. These are for fun and entertainment. Love will be sexually passionate this month. Commitment will be lacking in these relationships. Read about Capricorn dating tips.

The Capricorn relations with friends and family will undergo major transformations and only strong relationships will survive in November 2017. Married couples will rethink their decision to have a child.

The November 2017 horoscope for the Capricorn star sign foretells that health is quite good and will improve further. It is advisable to get rid of toxins in your body through detoxification. Flatulence and acidity related problems too need to be taken care of in November 2017.

The November 2017 horoscope predicts that you will be bold and independent this month but professional decisions should be delayed till next month.