Pisces March 2018 Horoscope foretells that this month main focus will be on spiritual and charitable activities, professional goals and advanced studies.

Planetary power is stationed in the eastern part of the horoscope for Pisces zodiac sign. Personal interests are more important than the interests of others. You are highly aggressive and autonomous and are in a position to have things your own way. Situations and others are under your control. Problems may arise in your workplace due to your authoritarian attitude in March 2018.

This month is a period of action and attainment due to the forward motion of about 80 per cent of the planets. Pisces personality can achieve their targets easily and quickly.

The birthday horoscope 2018 predicts that aspects of Mars and Jupiter will propel your career to great heights and the success will be amazing. There will be fantastic promotions and fabulous financial rewards for Pisces born. If you are looking for a job, period before the 20th is favourable in March 2018.

2018 astrology suggests that your financial earnings will reach maximum levels after the 20th of the month. Favourable aspects of Mars will shower you with plenty of money and financial prospects. Money is chasing you and you get money suddenly from unexpected sources. You are dressing for financial success and you are creating wealth easily.

2018 monthly horoscope is indicating that forward motion of Mercury will boost your self-assurance and magnetism. Love will be blissful, unselfish and fervent. There is a greater element of spirituality behind this love. Love with your spouse will be wholesome and highly physical. There is a merger of two souls along with the bodies in Pisces compatibility.

Singles will get romantic opportunities while chasing their monetary dreams.

March 2018 Horoscope forecasts that this month you are interested in enhancing your physical fitness and personal looks. This can be achieved by strict diet and exercise regimes. With the presence of a large number of planets in your sign Pisces, personal enjoyment takes a priority this month. There is a need for moderation to preserve your health. Refer to Pisces sexuality here.

Mars will give poise, power and vitality which will help you to do things faster. But this excess of energy may lead to unwanted fights and arguments and these should be avoided. 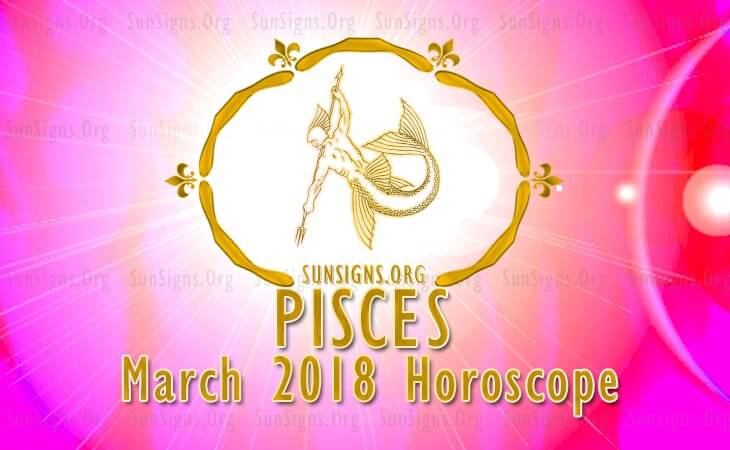 To summarize, Pisces March 2018 Horoscope predicts that planetary power is boosting your life and this is a period for enjoying your success with some restraint. You can also refer to 2018 Love and Sex Horoscope.