Libra March 2017 Horoscope foretells that this is a transitional month for the Scales sign. You have to balance your career issues with psychological matters and domestic problems. Initially family and emotions will be dominant for the Libra zodiac sign in March 2017.

The House of Others will become powerful by the end of March 2017. This is an ideal situation for the Libra personality to use the inherent qualities of adaptability and social intelligence. 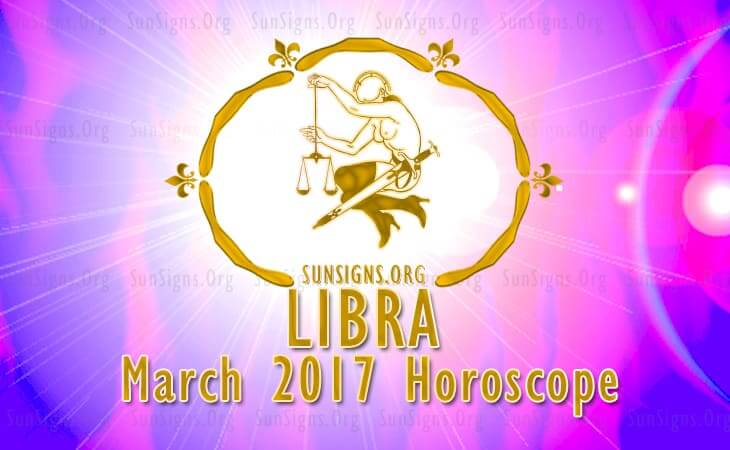 The March 2017 Libra monthly predictions forecast that Librans searching for employment will succeed to get jobs as planetary positions are favorable this month. Businessmen will flourish in their areas of commerce. Planetary aspects are not favorable for sales promotion and communication after the 20th of March 2017.

Libra, business travel should preferably be done before the 20th. Hard work is necessary to attain your professional objectives. Change of job or business may be necessitated by the Solar Eclipse and you will be able to get a better opening.

The 2017 zodiac signs predictions foretell that finances will be excellent after mid month. But it requires more effort from your side. All investments require more analysis. Tendency to spend lavishly should be curbed in March 2017.

The Libra horoscope for March 2017 shows that your family will have some reservations about your love partner till the 20th. More romance will be seen in your relationships after that. You can also plan for a baby in March 2017. Love for singles can be found in family circles or in social gatherings, during holidaying or in sports arena. Love is more impulsive with marriages and break-ups happening suddenly.

Libra, you are socially very active and will widen your network by including people from all fields, such as leaders of industry, spiritually oriented persons or people from fine arts and fashion.

The March 2017 Libra horoscope foretells that your health will be normal till for most of the month. After that some attention is required. You are very much keen on diets and health education which will help your fitness. Alternative methods of healing like Reiki healing can also be looked at.

You will pay attention to look more beautiful by making necessary changes in your dressing and grooming, due to the influence of the Lunar Eclipse. Your diet and health routines will undergo alterations with trying out weight loss foods to walking every day.

Overall, the Libra horoscope for March 2017 predicts a period when the right balance has to be maintained for a peaceful professional and personal life.