Pisces March 2016 Horoscope foretells that family and emotional stability will be more important than career for the Fishes. You can visualize the future of your career prospects with a calm mind and make plans for the future.

Pisces, your personal charisma is intense and it will draw others to you. You have to decide what you want in life and put your energies to achieve your goals. You will not depend on the whims and fancies of other people. You can take risks and divine grace is available.

Eclipses this month will make life more chaotic, particularly the Lunar Eclipse on the 14th March. 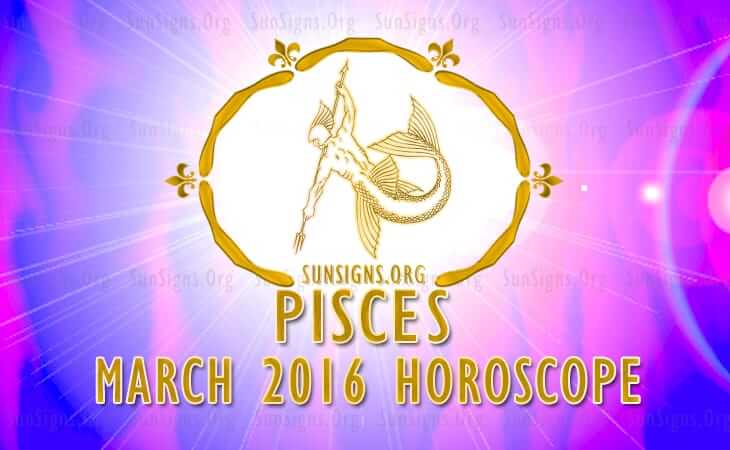 Pisces, if you are seeking a job, you will have favorable chances till the 20th March. You can be sure of getting into a fine job. Progress for the employed and those in business will be wonderful in spite of planetary retrogrades. Job changes are possible for the Pisces zodiac sign due to the Lunar Eclipse.

The 2016 March predictions for the Pisces show that monetary situation is wonderful and money will come through profession, friend circle and family influences.

If you are in creative field or in sales activities, you will have chances of making more money. Maintenance and beautification of home will require finances after the 20th March. Because of the Solar Eclipse, financial strategies of the Pisceans require modifications.

The Pisces March 2016 forecasts indicate that passion and personal charm will rule love during the first two weeks of the month. After that you will be more materialistic and look for monetary support from your partner. You will be rash in forming new relationships and there may not be any real commitment in them. Pregnancy is better avoided in March 2016.

Single Pisceans will be find their love mates while they are chasing their fiscal goals. The Solar Eclipse will create challenges for married couples and people in relationships. Singles may get married while married couples may end their partnerships if the union is fragile. There will be major alterations in the lives of children.

Health is less complicated in March 2016 for the Pisces. It can be augmented by massages and by natural remedies.

To conclude, the March 2016 Pisces horoscope warns that you will need to give more attention to family and health this month.