March 2016 Horoscope for Leo zodiac sign predicts that career and professional affairs will hold sway as planetary power is concentrated in the upper half of the birth chart. You will also have planetary help to be successful in business. Domestic issues and emotional aspects will not be important during the month. However your emphasis on career will help the family in the long run in making them financially secure.

Leo, in addition to your focus on career, social charm and adaptability will be essential to accomplish your career and life goals. Eclipses have a major impact on your spiritual life. Changes in the spiritual organizations you are linked with are possible.

Leo personalities may also start getting imaginary visions. There may be personality changes and your life as a whole is subject to major transformations. Your personal appearance and dress sense will become totally different in March 2016. 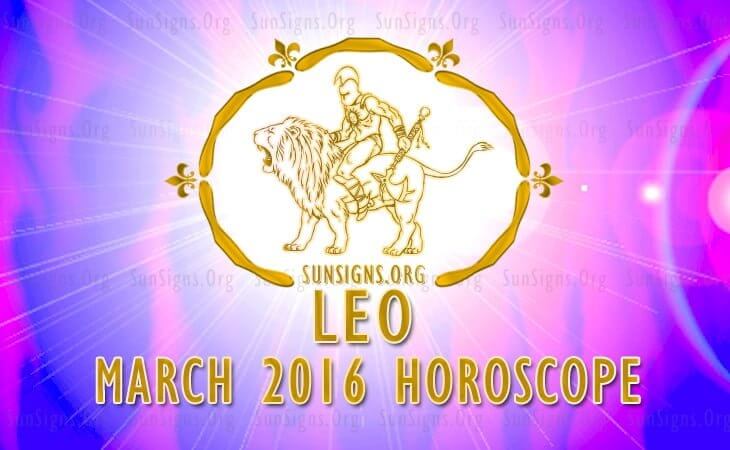 The Leo monthly predictions for March 2016 foretell that there will be frenzied activity in your professional environment. Your boldness should be mixed with diplomacy at the workplace.

Organizations will undergo major alterations during the month. You will achieve most of your business targets by 21st March and you can relax after that.

The Leo zodiac sign have incredible financial intelligence during the month. You have divine assistance in achieving your fiscal objectives. Your efforts will be supported by your quick assessment.

You will be expanding your activities overseas and earnings will increase because of this exposure. Money will be spent on humanitarian activities. The Lions should monitor their tendency to overspend.

The March 2016 astrology forecasts foretell that love and romance will be more passionate sexually for the Leos. Singles in relationship may confirm their partnerships. Married couples will be busy with their individual activities. Foreign travel with your spouse is likely after 20th.

Work related stress may affect marital relationships, especially sexual compatibility. Conflicts between couples will need to be solved before planning to have a child. Family problems will have to wait to see a resolution.

Health will be wonderful during March 2016 for the Leos and will see an upsurge after 20th. Your vitality will be admirable and you will indulge in sports activities. Your excellent energy will help you in achieving your targets in life easily. Including food like lentils, horseradish and bell pepper in your diet, will prove to be beneficial.

To conclude, the 2016 March Leo horoscope foretells of a month filled with vitality and positive energy.