March 2015 Cancer Horoscope predicts that like in February 2015, career matters will be prominent this month compared to family and domestic issues. This is because the planetary strength is concentrated in the upper half of your horoscope towards the midheaven.

Planets are equally distributed between the Eastern and Western parts of your birth chart by the third week of the month. You have to find an intelligent balance between independence and social support.

At times you will need to take the support of your acquaintances while at other times you can follow your own life path. First week of March 2015 is auspicious for the Cancerians for taking up new targets and the last week is suitable for completing your projects.

The March 2015 career forecasts for the Cancer zodiac sign predict that there will be major transformations at the work place during the month. You may go in for a change of job with better prospects.

Your novel ideas will be appreciated by your superiors and you will be financially benefited. Overseas travel for promotion of business is probable.

The March 2015 financial horoscope for the Crab foretells that your monetary situation is promising throughout the month accompanied by large spending. Your money situation will improve after the third week of the month. You can go ahead with risky investments which will turn out to be profitable. 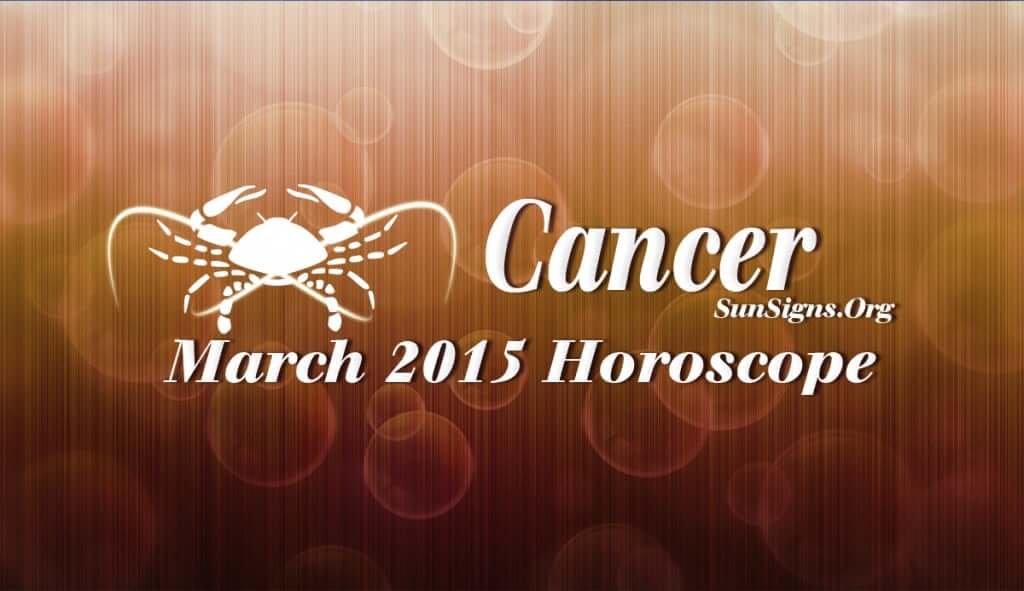 The Cancer love horoscope for March 2015 foretells that you will try to find love in the office or with people who are your business associates. All major decisions regarding family should be postponed to a later date. Children and pregnancy are not on the cards. You can also know more from the 2015 Love Sex horoscopes.

The Cancer horoscope for March 2015 suggests that you take sufficient care of your health after the third week of the month. Sinus infections and related ailments might trouble you this month.