Kanya Rashi 2015 predicts that all things will be hunky dory during the first half of 2015 due to the favorable position of Jupiter. Second half will create a few hardships for the Kanya Rashi. Plenty of courage and caution has to be exercised to stay afloat. 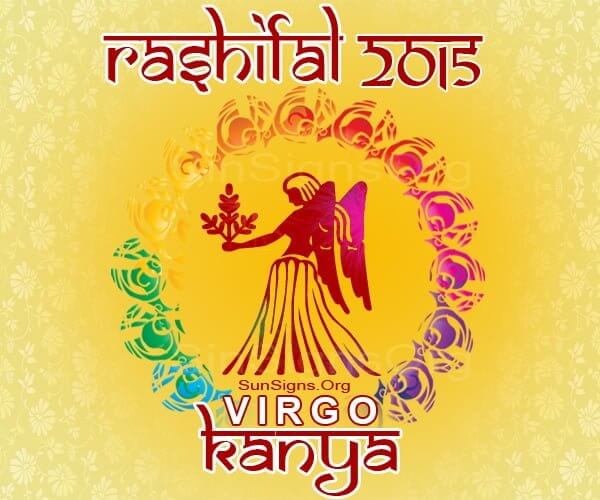 2015 Jyotish career astrology forecasts for the Kanya Rasi presents an excellent first half for both professionals and businessmen. During the second half of the year, businessmen should be careful about the actions of their partners. They may try to cheat you. It is better to maintain cordial relationship with your colleagues and superiors during the year.

The financial predictions made by Kanya Rashiphal 2015 forecast that money will come easily but expenses will increase disproportionately. You should save money as far as possible and avoid big investments. Do not indulge in speculation and stock market trading. This will only result in losses.

Singles of the Virgo zodiac sign will get into relationships during the first half of 2015. Marriage is likely during this period for committed lovers. The Kanya Rasi 2015 predictions show that married people have chances of having children during the first half. During the second half, they should not flirt with new partners of the opposite sex, to avoid conflict with their spouses.

The 2015 Bhavishya Rasi horoscope foretells that health problems of parents and consequent expenses are likely. Relationship with elders and family members should be kept free of conflict for the sake of harmony. You can also take a look at our Horoscope 2015 annual astrology predictions.

Travel for health related issues is on the cards, predicts the 2015 Kanya Rashifal. Holistic destinations and spa vacations can be a good choice.

The Kanya Rashi 2015 predicts that health will be problematic for the whole family during the year 2015. It is advisable to go in for precautionary measures wherever possible.