Aries June 2018 Horoscope forecasts that both career and family affairs are important this month. This is due to the fact that planetary power is equal in both the northern and southern sectors of the horoscope.
Planets have started moving from the eastern half of the chart to the western half. Aggression, free enterprise is gradually giving way to collaboration and social skills in June 2018.

About 50 per cent of the planets are moving backwards this month. Hence the environment around you will be lethargic, and things are hardly moving. You will be highly disappointed at the state of affairs, but are helpless. Your attitude towards these delays will decide the future of your destiny.

Personal progress is not hampered by the slow progress around you in June 2018. Money Planet, Venus; Career Planet, Saturn; and Ruler Planet, Mars are all in forward momentum. External influences are minimal in affecting growth of Aries star sign.

Retrograde of Mercury along with the Solar Eclipse of 1st are having a negative impact on your communication equipment such as phones and computers. Your communications are also misinterpreted by people who get your messages. You have to be very careful with the equipment and people, and take necessary steps to avoid any mishaps.

Main areas of interest for the month of June 2018 will be spiritual and advanced education, finance, sexuality and marketing ventures.

Aries astrology for June 2018 predicts that professional matters will not create any problems during the month, and growth will be good for Aries personality.

Aries monthly zodiac horoscope for June 2018 foretells that your earnings will be wonderful till the 10th and after that you have to struggle more. Aries zodiac sign will enjoy making money and will splurge on personal luxuries when the going is good. Rams can expect unexpected financial bonanzas from your social contacts or professional groups.

2018 horoscopes are predicting that relationship with your spouse or partner will be wonderful till the 10th of June 2018. After that, communication will be the real culprit, and you should be cautious till the 17th. Aries compatibility will improve with the favourable aspects of Mercury after that. This is also a good month to get pregnant.

The Solar Eclipse of the 1st will bring significant changes in the lives of your children. Their academic life will be subjected to changes and your relationship with them will be under stress.

The Lunar Eclipse of the 15th will bring about radical changes in the lives of children doing their post-graduation studies. They may change their colleges or their courses of study. Their ideologies and principles will be in for alterations in June 2018. 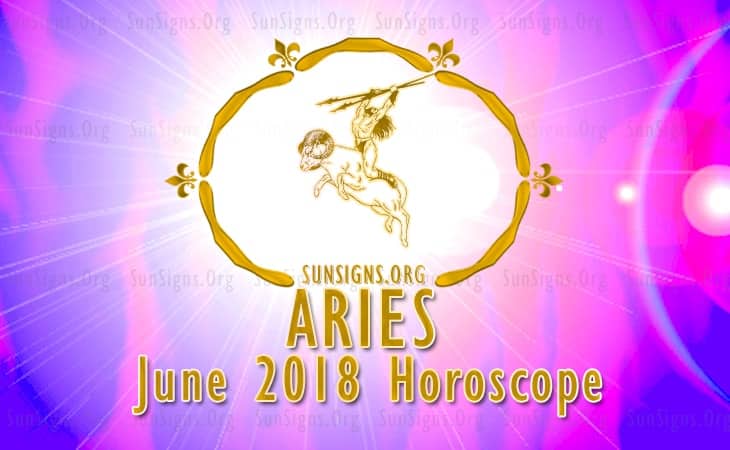 Health Predictions foretell that health will be superb till the 21st and becomes fragile after that. Planetary aspects are not favourable and you have to conserve energy as much as feasible. Food habits will become important after the 16th.

June 2018 Aries horoscope predicts that health and finances will be fabulous in June 2018. Career and love relationships may face some turmoil. Refer to Numerology 2018 Horoscope.