Taurus July 2017 Horoscope forecasts that the planetary power is in the Southern half of the horoscope towards the mid-heaven sign. The House of Family is more dominant than the House of Career. Domestic and psychological matters will rule over professional concerns for the Taureans. As planetary aspects are not favorable for career you need to focus on family and home. Work on the emotional aspects of career in July 2017.

Taurus, most of the planets are moving to Western sector (descendant sign) of the chart by the 22nd of July 2017. Hence there is a shift from autonomy to social skills by the end of the month. Self-assertion will give way to consensus, and independence will have to be replaced by collaboration to attain your objectives in life in July 2017.

Taurus, there are major movements of planet Mars and planet Saturn in your life in July 2017. The aggression of Mars is countered by the restraint of Saturn. You should attend to things of importance and forget about minor things. Taurus zodiac athletes and sportsmen will do exceedingly well in their fields and are subject to the caution imposed by Saturn in July 2017. 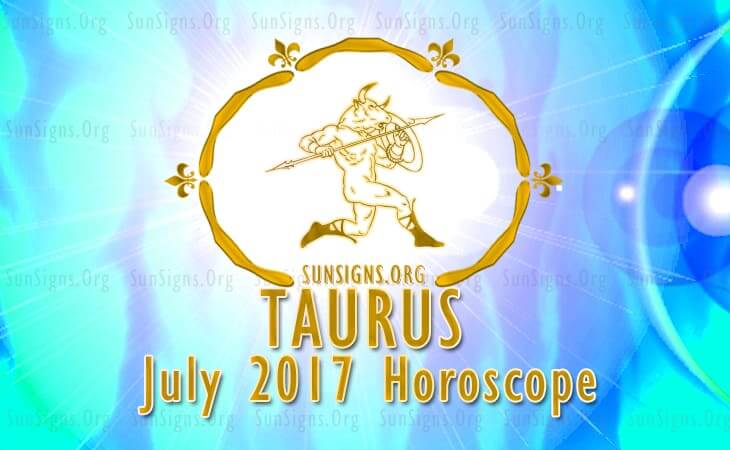 The career of the Taurus personality will be constructive and progress is steady in July 2017. You can use this period of slow growth to enhance your professional skills by higher studies to improve your knowledge. Also try to improve the method of communication with others.

The astrology predictions for July 2017 forecast that finances will be wonderful due to the forward momentum of Mercury for the Taurus star sign. Money can be made from various sources during the month.

Earnings will come from sales promotion and trading until the 8th, from property transactions and with the help of family upto the 27th of July 2017. After that money flows from profession, risky trading and innovative methods. Influence of planet Saturn will not allow you to take undue risks. Get your free Chinese horoscope 2017.

Taurus natives will also spend money on academic excellence, on socializing with friends and family members, and on furnishing the house.

The 2017 love horoscopes predict that the Taurus natives can take up domestic tasks after the 22nd of July month of 2017. You will have enough time to harmonize relations with your parents by then.

Love will be highly dynamic and enjoyable this month for the Taurus men and Taurus women. You are able to attract partners, thanks to your personal magnetism. You will have ample opportunities to get into love partnerships. This month is an auspicious period for marriage and having children.

The Taurus health will be satisfactory till the 22nd of July 2017. After that you can stay fit by going on a recreational holiday to energize your system. Healthy nuts will improve your metabolism prevent you from snacking on junk food.

The Taurus monthly horoscope for July 2017 predicts that this will be great month for developing new relationships and learning new skills.