Leo July 2017 Horoscope predicts that there is a change in emphasis from professional success to family issues and emotional stability. Harmony in the family will help your career accomplishments in July 2017.

Leo, you should under normal circumstances be able to accomplish things with independence and bold actions. But you are limited by the retrograde of 40 per cent of the planets in July 2017. Progress in life for the Leo zodiac sign will be steady but quite slow. You can go ahead with your plans and seeking cooperation of others will be helpful. Presence of Saturn in your star sign will ensure perfection in what you do with a certain amount of caution.


July 2017 is good for contemplation and introspection for the Leo personality. Get connected with the Supreme Power and review your life of the past few months. You will be guided by the divine forces regarding the corrections to be made in your life and the correct way of doing things in the month of July 2017. 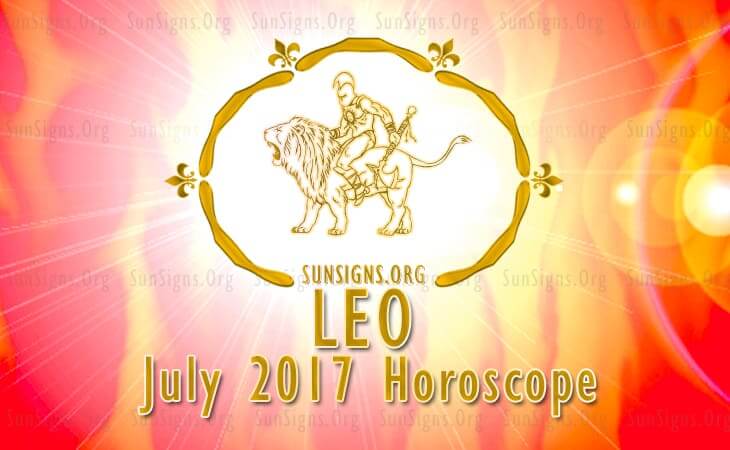 The 2017 horoscope for the Leos forecasts that career will become hectic by the end of July 2017. Progress in business can be improved by professional training and by traveling for work purpose. Lions seeking employment will be able to get jobs easily in July 2017.

The July 2017 monthly astrology predictions forecast that planetary positions are favorable for monetary progress for the Leos. All major decisions for investments should be done before that. Speculations with proper analysis will yield good earnings. Leo, you are dressing for financial prosperity, but keep your budget in mind in July 2017.

The Leo monthly horoscope for 2017 July also predicts that planets are not favorable for existing relationships which will be under threat. The month is not ideal for taking major decisions such as marriage, divorce or pregnancy. Things will settle down with time but do not be in a haste to break up your relationships. Read about Leo compatibility.

Single Leos will be ready to form love partnerships. But there appears to be no encouragement from the other side. Allow love to bloom gradually in July 2017.

The Leo July 2017 zodiac predictions also foretell that health will be fabulous and vitality will be stronger this month. Presence of planet Venus in Leo sign till the 23rd will make your personality charming and desirable.

Health can be further enhanced with good Leo fitness and diet plans. After the 23rd, you will be interested in plenty of partying and pleasure trips. Here are a few tips to avoid having a hangover and healthy party appetizers.

The July 2017 Leo horoscope predicts that this is a fun filled month but no major life changing decisions should be taken.