July 2016 Horoscope for Capricorn zodiac sign foretells that the focus should be on career and outer objectives. Whatever you had visualized earlier should be converted into reality by hard work.

Socially the Sea goats have reached the peak for the year. You have to depend on others if you want to accomplish your goals in life. Your capabilities and determination are of little value. You have to adapt yourself to others and situations. 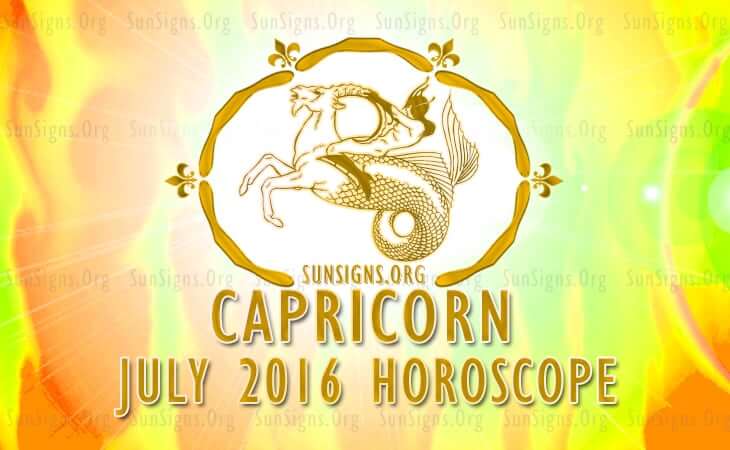 The aspects of planets are not beneficial for the Capricorn career in July 2016. You have great ambitions for your job or business, but unfortunately there are many serious challenges. Do not create undue stress by expecting too much. In July 2016, you should take the slow professional progress in your stride.

The 2016 Chinese zodiac predictions foretell that in spite of the unfavorable planets, monetary status is excellent in July 2016 for the Capricorn. Your financial instincts are working and you have the support of your social network for your financial projects.

You will have no problem to raise funds for your business ventures. Excess money should be used to clear pending loans. All important investments require more scrutiny.

The July 2016 Capricorn astrology forecasts suggest that family relationships will undergo major transformations during the month. This month is ideal for getting rid of all the junk which has accumulated in the house. You should replace them with new things. Here are a few Feng Shui tips for your home.

Capricorn, love is powerful this month in July 2016. Singles will have many romantic opportunities, but marriage is still far away. They will have occasions to form liaisons with influential people of the opposite sex. More romance and sex for Capricorn is forecast for the end of the month. Family members in committed relationships may get married. Pregnant women will have a wonderful month.

The Capricorn July 2016 horoscope also predicts that health requires more attention till the mid of the month. Your awareness about the necessity for good fitness will be of great help. If you want to be healthy, you should not be affected by the failures in life. Enjoy your successes and accept your failures. Being mentally strong is essential for long term happiness.

Health can be enhanced by cleansing your body of toxins. Diet and weight loss regimes will be of assistance to maintain your fitness. Your vitality will be excellent this month.

To conclude, the Capricorn forecast for July 2016 suggests a social and romantic month to be spent with your loved ones and family.