January 2017 Leo Horoscope forecasts that profession and career concerns are in the back burner for the Lions this month. But family and emotional matters will be important. You can use this opportunity for planning your future and make any course corrections in your existing plan. Planetary strength will slowly move towards the Northern sector of your birth chart by the end of the month after the Mercury Retrograde 2017.

Self-will and determination will rule the actions of the Leo zodiac sign in January 2017. It will be wiser to be flexible and listen to others with patience.

Your house may undergo major restorations based on Feng Shui concepts for a happy home. Family relations may become unstable due to illness of a family member. 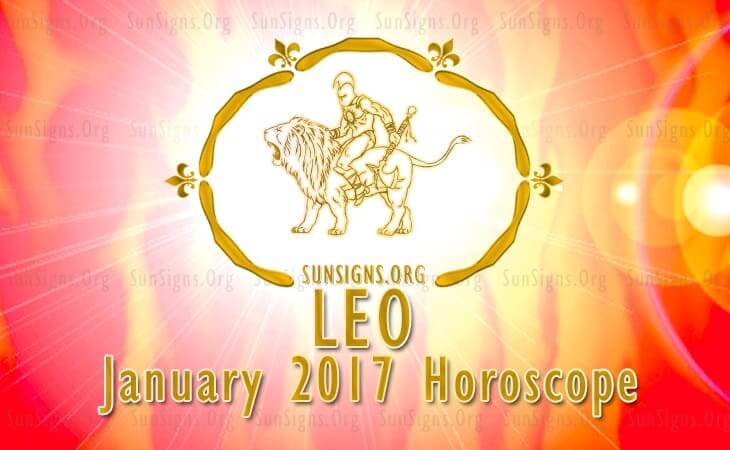 The zodiac 2017 predictions foretell that the Leos will have the support of their colleagues at the office. Thus you will be able to attain your career goals easily. You may make changes in your work environment which will prove beneficial for your business in January 2017.

The Leo monthly horoscopes for January 2017 predict that your finances are fabulous this month. As Mercury is not favorable till the 12th, any new financial project should be kept on hold till that time. Some caution and lot of analysis should go into the execution of monetary plans of the Lions.

The Leo social life becomes highly active towards the end of January 2017. Planetary movements are favorable for dating new people. You can look forward to plenty of socializing with parties and social functions.

Single Lions and married people will be looking for novelty in their relationships in 2017 January. This is the time to experiment with new ways to love and make it more sexually exciting. Love is plentifully available for single Leos. Love may be sudden and found in foreign locations with people of different culture. Love is not only romantic but highly passionate and can lead to pregnancy. Read about Leo sexuality.

The monthly horoscope 2017  predicts that health will be fantastic in January 2017 for the Leo personality. Try to slow down and relax as much as possible. Emotional health can be enhanced by resorting to spiritual meditation techniques. Your vitality will see an upsurge after the 19th of the month.

The Leo January 2017 horoscope predicts good health and well being this month.