Aries January 2017 Horoscope predicts that you will be highly motivated to accomplish your goals this month. It may force you to keep your family matters in the back ground. However your family is highly supportive of your ambitions and effort.

The forward motion of most of the planets in January 2017 will make your life highly stimulating, energetic and vigorous, Aries. You will be highly successful in accomplishing your career objectives. It is important that you should try to conserve your energy during this period of hectic activity.

Mercury Retrograde 2017 is not favorable till the 12th of January 2017 for the Aries zodiac sign. You should postpone your financial dealings and promotional activities to the second half of the month. 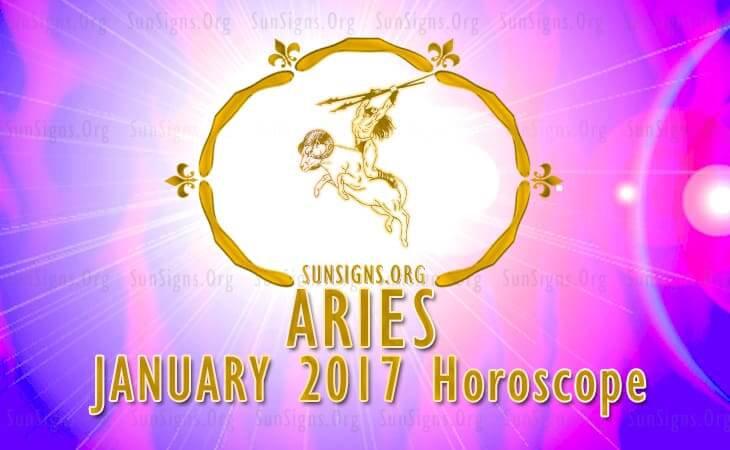 For professionals and career-oriented Arians, January 2017 will be a highly successful month. The 2017 horoscope predicts that you can expect improvement of status and financial rewards in business.

The Aries January 2017 monthly horoscope forecasts that financially this is a highly profitable month due to pay rises and business activities. It will be prudent to keep a check on your expenses.

You will have the support of your family in your monetary projects. All actions with government authorities can be done after the 10th of January 2017. Get your 2017 Numerology Predictions.

The love and sex astrology predictions 2017 foretell that the rams will have a highly dynamic month as far as love and romance are concerned. You will have to find time for your social and domestic activities in spite of your preoccupation with your career. Love is to be found in the work place, during visits abroad, in religious and academic environment for single Arians.

Love in Aries relationships takes over towards the end of the month as pressure at the workplace eases. Socially you will come in contact with many new people. This is also and excellent time to spend some quality time with your spouse. May be even a pregnancy can be planned as the Aries sexuality will be at its peak.

Health will be delicate till the fourth week of January 2017 for the Aries born. You should focus on important things and try to relax as much as possible. During the month end your vitality will go up enormously and you should try to avoid tension of any sort. Patience will be necessary in your social dealings.

The January 2017 monthly horoscope for Aries predicts a fantastic month both in terms of career as well as love.