The Capricorn Horoscope for January 2016 forecasts the predominance of self-will and rigidity in actions to achieve objectives in life. You can dictate your course without resorting to compromise or conciliation with others.

But it is imperative that your personal objectives should be tempered by spiritual backing. You should assess your past life actions and make necessary corrections or improvements to your strategies in life. Domestic matters and family are important over profession in January 2016 for the Sea Goats.

The emphasis this month will be on monetary affairs and enhancing your personal appearance. 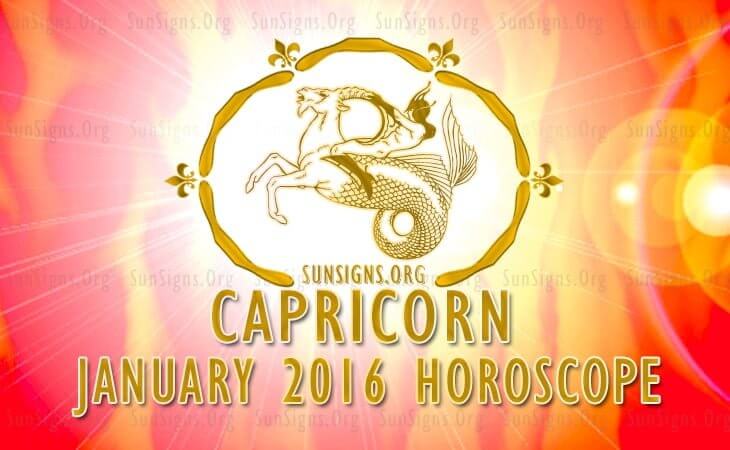 The January 2016 monthly predictions foretell that you will have abundant professional prospects during the month and you will be confused to make the right choice.

As planetary positions are not favorable, do not be in a hurry to come to decisions where important business deals are concerned. You will excel in the fields of sales, promotion and media.

Financially January 2016 will be a fruitful month for the Capricorn zodiac sign especially after 20th. Businessmen will be able to raise finances without problems. Money flow can be expected from marketing the products or through speculation. Excess money should be used to reduce existing liabilities.

Avoid costly purchases and focus on recovery of outstanding money during the Mercury Retrograde. Wholehearted support of family members can be expected in your fiscal ventures. Your financial intelligence will be exceptional and your investments will be profitable in January 2016.

Divine forces are not favorable in matters of love and relationships during the month. In spite of your captivating personality, love life will not be stimulating. Singles will be presented with plenty of relationship opportunities which will be directionless.

However this will satisfy their need for fun and enjoyment. Situation improves radically after the second week of the month. Dating online is a good idea, but do not expect serious commitment. You may have to deal with news about children or pregnancy.

The 2016 January Capricorn astrology also warns that family atmosphere can be tempestuous with some members turning tough to handle. Home may require inevitable maintenance, renovation and furnishing expenses.

Health and well-being of the Goats will be superb in January 2016 and you can remain in shape with sufficient exercise. Capricorn fitness routines are guided more by your personal ego than by necessity.

To conclude, the January 2016 Capricorn forecasts suggest a month of personal fulfillment with not many major decisions being taken.