Sagittarius February 2017 Horoscope foretells that the House of Family is very dominant this month. Hence domestic issues and psychological matters will take precedence over career and ambition in life for the Sagittarians. The time is ideal for renovating and beautifying your house. The focus of the Sagittarius personality will be on their home and the surrounding vicinity.

Sagittarius, you can design your own life and work towards the attainment of your goals in February 2017. You can use your determination and diligence to create your own world. There is no need for seeking the assistance of others or their opinions.


Planetary aspects are favorable for scholarly exercises and improvement of knowledge for the Sagittarius zodiac sign in February 2017. Your communication skills are also excellent and you can combine your intellectual and communication faculties to create works of excellence in the academic field.

The Sagittarius personality will be drawn towards different foreign cultures by study or by attending meetings involving foreigners. You can satisfy this hunger by visiting eateries run by foreigners or shops dealing with imported stuff. Travel is on the cards, but it will be mainly inland in February 2017. Get your free travel astrology reading. 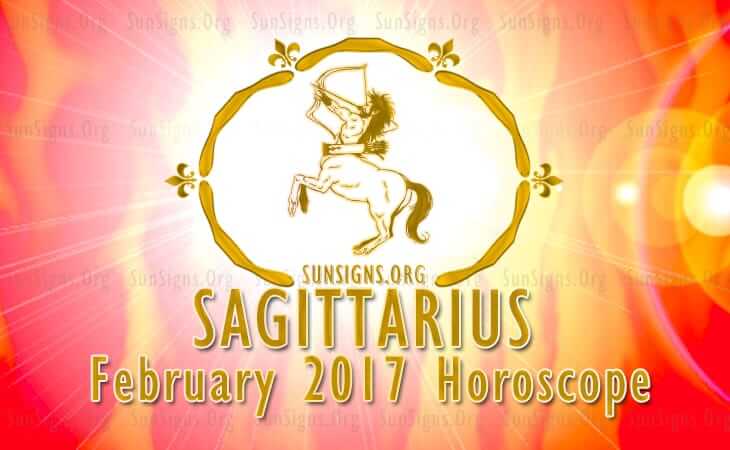 The zodiac 2017 predictions forecast that the Sagittarians will be focusing on the mental aspect of their career which will come in handy in future. You will be interested in enhancing your technical and innovative capabilities by technical studies and by attending conferences in February 2017.

The February 2017 monthly horoscope for the Sagittarius born foretells that finances will be sound during the month. Opposing planetary aspects will cause some confusion in your money dealings. You have to properly analyze and take a cautious approach to avoid financial mishaps.

The Sagittarius love February 2017 love horoscope predicts that romantic opportunities for single Archers are to be found in your locality and in close quarters. Love can also be found in academic environment or you might fall in love with your best friend.

Family members and neighbors may help you to find love mates. You are looking for both intelligence and emotional compatibility in your partnerships in February 2017. Married Sagittarians might even want to have a child this month.

The health of the Sagittarius personality will be sound till the 18th of February 2017. After that you have to take enough rest to remain fit. You will lay emphasis on improving your emotional health in addition to physical fitness. Be sure to maintain an ideal body weight and work on your weight loss.

The February 2017 Sagittarius monthly horoscope predicts a blissful month spent in the company of your family and friends.