Capricorn February 2017 Horoscope predicts that planetary aspects for career are not beneficial during the month. Domestic and psychological issues dominate over career and professional matters this month. You can take time to work out professional strategies for the future.

The self will of the Capricorn personality is important during the month. You have to decide what you want in life. You can follow your goals with diligence and overcome any opposition you may face. It is your way all the way. However you do require the help of others to attain your success.

If you are a Capricorn born looking to expand your knowledge base, you will get academic opportunities towards the end of February 2017. 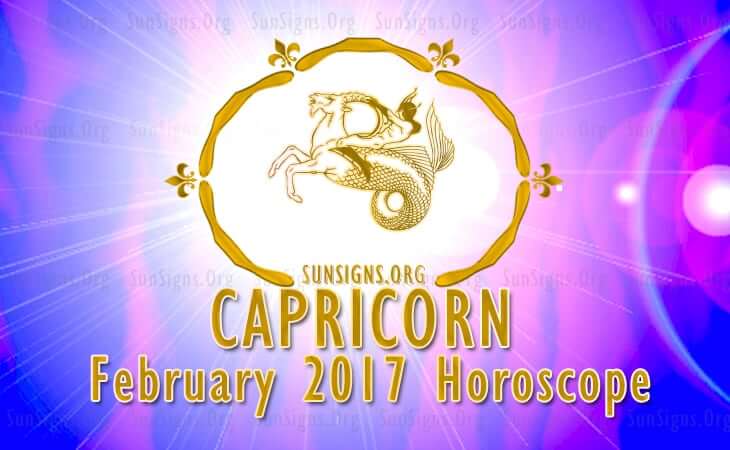 The February 2017 horoscope for the Capricorn zodiac sign predicts that your office environment will be full of politics. There may be drastic changes at the top in the organization where you are employed. Watch the situation from the side lines, analyze and take proper decision as to move away from the present organization.

Capricorn people employed in sales and marketing will do well in their jobs this month in February 2017.

The 2017 forecast for the Capricorn sun sign predicts that it will be a momentous month for your finances. Planetary positions are extremely favorable and you have divine assistance to flourish financially.  Your financial intuition is at its peak in February 2017. You will get extrasensory visions and messages which will help you to accumulate enormous amount of wealth.

The 2017 monthly horoscope predicts that everyone including family members, friends and your company will play a part in your monetary success. You have financial assistance from your life partner. Money can be made from social networking, and your investments will yield fabulous returns. Along with earnings, expenditure will go up for the Sea goats in February 2017, but you can handle the situation intelligently.

Capricorn, you will be oozing with personal allure and magnetism this month. Somehow you do not seem to be interested in love and romance in February 2017. You are very much attached to your family. You can put off any restorations to the present residence for the time being. Pregnancy and sexual relationships between couples will be blissful.

The February 2017 Capricorn horoscope predicts that your health will be admirable this month and your energy levels are zooming. This will help you in your financial well-being. You will also pay serious attention to your physical and emotional fitness. You will enjoy your morning walks and meditation sessions.

The February 2017 astrology predictions for the Capricorn zodiac sign forecast a month to be spent in the company of your loved ones.