Taurus February 2016 Horoscope predicts that you will be mainly involved in activities dealing with profession, social circle and mysticism. Your focus will be on the execution of large ventures till the third week of the month.

Career and business will be the major force driving your life in February 2016. Family and home affairs are not in the radar this month for the Bulls. 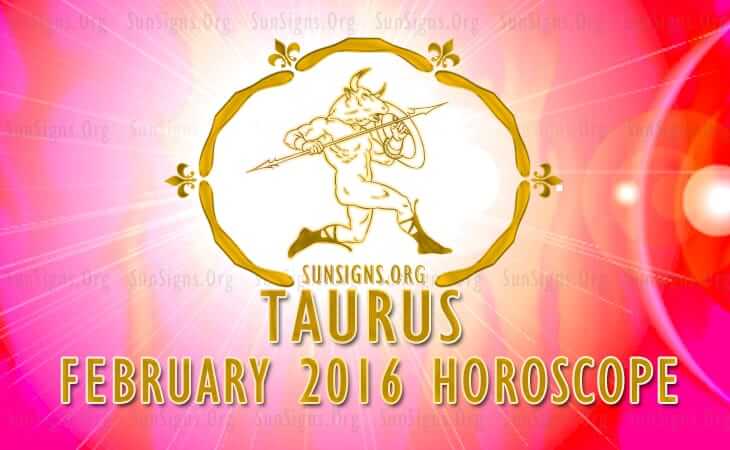 Professionally the Taureans are at the zenith in February 2016 which will automatically bring you financial rewards along with improvement in status. This may mean more hard work with a possibility of a change of place of work.

Taureans engaged in professional activities will earn plenty of money because of their diligence through salary raises and change of status. February 2016 will bring financial bonanza unexpectedly through inheritance or social contacts.

The 2016 Taurus monthly predictions foretell that your finances will get a boost by openings provided by your friends and family members. Your financial acumen will be strong and you will convert your opportunities into success stories financially. Money can be raised without difficulty, but it will be wise to cut down unnecessary expenses.

Use excess money to reduce your debts. You will have the support of your superiors in your monetary advancement. Investments in technology and communications will be profitable in February 2016 for the Bulls.

Love will be complicated for single Taurus born during this month. Interference of family members may spoil the harmony in your relationships. Love partnerships can be made while pursuing religious or social activities.

Existing problems with your partner will be resolved by the end of first week. Going on a vacation is a good way to renew your relationship. If you are looking for remarriage, the month will provide you with enough possibilities. Taurus sexual relations will improve. Pregnant women should take extra precaution.

Planet Mars will make you more aggressive and impatient during the month. Health will be delicate till 19th February due to work related stress. It can be improved by enough rest and by chakra healing.

To conclude, the 2016 February horoscope for Taurus forecasts a month of fulfilling professional and personal commitments.