February 2016 Scorpio Horoscope predicts that family and domestic concerns will take predominance over career and professional matters for the Scorpions. Planetary power is concentrated in the Southern horizon towards the nadir. This indicates inner world and inner strength will be important along with family issues. You will be in the right frame of mind to think about your career and come out with proper strategies for future business and professional growth.

Social capabilities and contacts will be very much necessary for the Scorpio zodiac sign to attain their goals rather than personal ambitions and free will. Conciliation and collaboration are necessary and personal strengths will not be of much help. Until 18th February, progress in life will be swift based on your diligence. 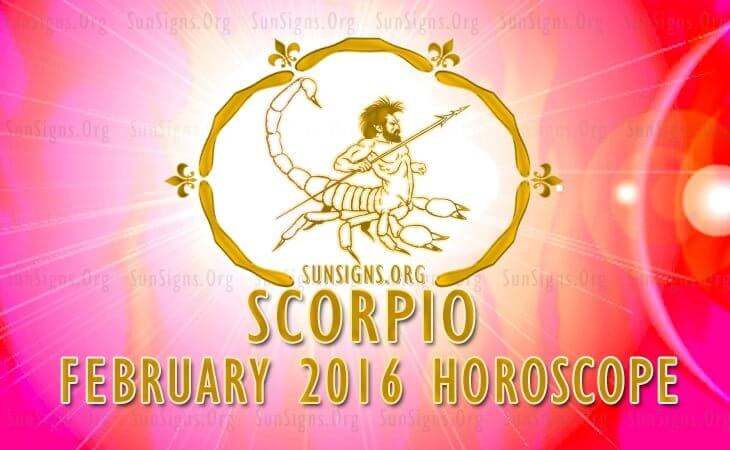 The Scorpio 2016 February predictions foretell that the office atmosphere will be pleasant and cordial. Future plans can be arrived at during this month and they can be executed at a later date. Most of you will be working from the peaceful environs of home.

Challenges in financial efforts of the Scorpios are likely till 19th February and more effort is necessary to earn money. Situation eases after that due to the support of your superiors and family members.

Money flow will be easier due to your financial skills. Risky investments and creative works will bring in good amount of cash. Expenditure on family and entertainment should be done carefully.

The February 2016 Scorpio astrology forecasts suggest that singles will be able to form relationships while they are involved in social events, professional environment or in fitness centers.

You will be in a hurry to forge love companionship with more audacity and force. Love for Scorpio will be gratifying and intense. Chances of committed relationships or pregnancy are not very bright. Eclipses may pose some obstacles for existing relationships temporarily.

Till 18th February, health will be fragile for the Scorpio personality, but will improve radically after that. You can enhance your health by working smartly and with sufficient relaxation. It can be further improved by socializing more frequently and paying attention to your spiritual health. Cleansing the body of impurities by chakra healing will be necessary during February 2016.

To conclude, the Scorpio horoscope for February 2016 foretells that this is the time to build upon your contacts for future gain.