Scorpio December 2017 Horoscope foretells that majority of the planets are in the Southern sector of the horoscope and the House of Family will become more dominant after the mid of December 2017.

Career will be in the background while family and psychological matters will be in center stage. The Scorpio zodiac will focus on establishing harmony in family relationships.

The December 2017 zodiac predictions forecast that you are very much autonomous and have the power to do things your own way. Situations can be changed to suit the Scorpion’s requirements. Though you are not dependent on others for accomplishing the objectives in life, it will be wise to seek the cooperation of others. 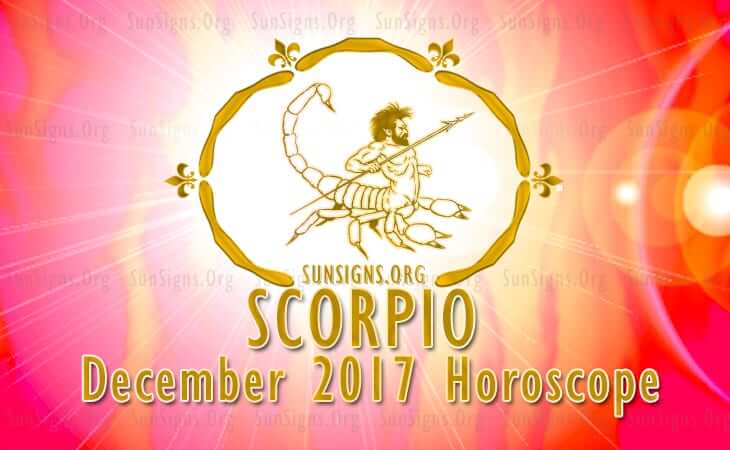 Scorpio, career opportunities will be chasing you this month. You will get good offers during the third week of December 2017. You are looking for emotional satisfaction in your profession. The 2017 horoscope predicts that due to planetary influences you are likely to be less forceful in achieving your professional and business goals in December 2017.

The December 2017 monthly astrology predicts that financially this will be a prosperous month for the Scorpio natives. Monetary opportunities will be chasing you. It requires plenty of hard work and lot of perseverance to achieve your objectives. You will have the support of family members in your fiscal ventures. You will spend money on buying luxurious items in December 2017.

The Scorpio finances can be enhanced in December 2017 by augmenting your confidence and outlook. You will be spending money on improving your standard of living. Money is made from intuition and by following your dreams. Charitable work and social work will consume part of your earnings in December 2017. Get your 2017 Chinese horoscope.

The 2017 romance predictions forecast that love is excellent this month in December 2017 for single Scorpions. You will find love in family circle, academic environment or in the vicinity of your residences. You will be attracted to people with intellectual and communicative abilities or a generous and caring person.

Mercury retrograde in December 2017 will create obstacles in present Scorpio relationships. Your partner will be looking for more freedom. You may have to take a decision on continuing the relationship. Here are tips to deal with a divorce.

The Scorpio health requires more attention and proper care. You should look at improving your emotional well-being and work smartly to maintain physical health. Be wary of body odor, bad breath and food poisoning.

The December 2017 Scorpio horoscope predicts that the month is divided between giving attention to career and family.