Pisces December 2017 Horoscope foretells that the planetary strength is in the Northern sector of the horoscope towards the nadir sign. The House of Career is robust while the House of Family is blank.

Career issues will be in the spotlight December 2017. Domestic issues along with emotional matters will not be that important for the Pisces zodiac. You are able to balance the spiritual and materialistic concerns pretty well.

The December 2017 monthly zodiac predicts that majority of the planets are in the Eastern half of the chart. The Pisces sun sign can achieve their objectives by personal confidence and strong actions.

There is no need for depending on others and you can decide your own course. Social grace is not necessary and flexibility is not required to attain your ambitions in 2017 December month. 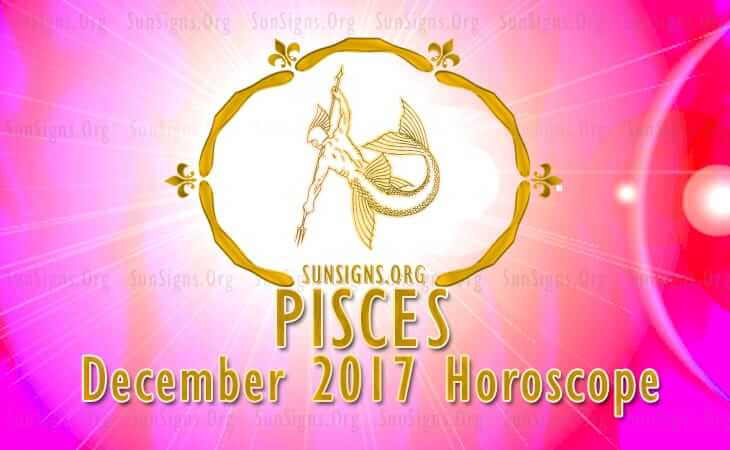 The 2017 horoscope predictions forecast that professional growth can be achieved by improving knowledge base through training. You may have to travel extensively for professional reasons. The Pisces career will grow while they are engaged in humanitarian activities and social service. Family encourages your efforts to enhance your career growth.

Though career is advancing rapidly, the Pisces personality will have to face many challenges. This may affect your energy levels. There will be turbulence and power struggles in the organization, but these changes are beneficial in December 2017.

The 2017 monthly forecasts predict that the monetary situation for the Pisces sign is quite delicate. More effort is required to earn money in December 2017. Planetary movements will help your finances. Earnings will improve as your financial intelligence is sharper and you are able to take the right decisions promptly.

Money for the Pisces man or Pisces woman comes from career through pay rises and promotions in December 2017. Finances will also be boosted by family members. After the 20th of December 2017 friends and social contacts will help you to accomplish fiscal growth.

The 2017 December Mercury retrograde causes high unpredictability in matters of love for the Pisces star sign. Socially you will come in contact with highly influential people.

Single Fishes will be looking for love mates who can assist professional growth. Excellent Pisces compatibility is to be found in the job environment with colleagues and seniors. The married Pisces couples might start trying for a baby in December 2017.

The Pisces health will be a cause of concern till the 21st of December 2017. You can enhance fitness through spiritual healing. Social networking for health will help you to improve your emotional and physical health.

The December 2017 Pisces horoscope foretells that love and money will be erratic but business prospects will be favorable.