Cancer December 2017 Horoscope predicts that there is equal number of planets in the Northern and Southern halves of the chart till the 21st and both the halves are equally powerful. The power shifts to the upper half after that (midheaven sign) and hence professional matters will be dominant.

The 2017 December astrology predictions forecast that the western half of the horoscope is more powerful than the Eastern half this month. The Cancer zodiac people have to accomplish things with social skills and adaptability.

Autonomy and determination will not help the Cancer people and should be in the background for the present. Compromises will have to be made and interests of others will have to be taken into account in the December month of 2017. 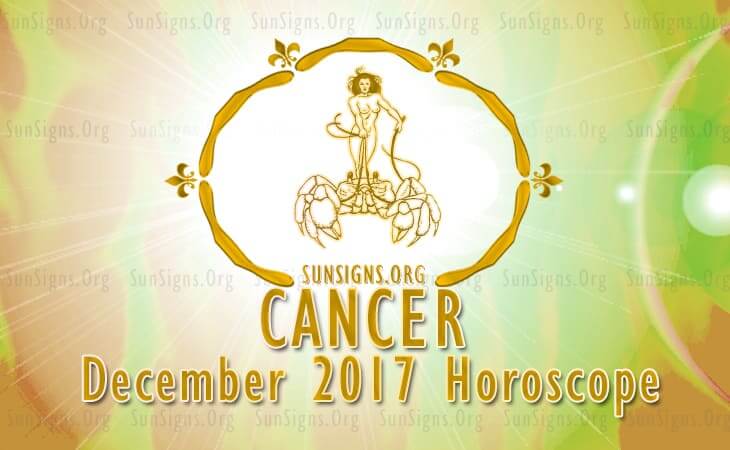 The Mercury retrograde dates of December 2017 will affect the Cancerians. Career environment will be tough but enough growth will be there. You are able to achieve your business targets in your profession easily and this will result in promotions and financial rewards.

Cancer, your career planet and Work planet are pulling you in different directions. You have to manage these contradictory forces to succeed in your profession in December 2017.

The 2017 zodiac predictions foretell that the Cancer star sign can make money from profession and with the help of social contacts. Social intelligence will be necessary to earn money this month.

Professional earnings will be responsible for your earnings till the 21st of December 2017. After that money comes through your social contacts. Management will appreciate your social skills and this will lead to better status in your career in December 2017. Read about money symbolism.

Cancer compatibility in love will be more romantic and tentative. However no committed Cancer partnerships are likely as planetary influences are not favorable in December 2017.

Current Cancer sexuality in relationships will face problems and situation will be highly volatile. After the 20th of December 2017 love will be passionate and there will be more zing. This is also an auspicious month to plan for a pregnancy.

The December 2017 Cancer horoscope predicts that your health will be wonderful for most part of the month. General aches and muscle pain will need some help. Try to include vegetables like zucchini, bitter gourd, curry leaves and green beans in your diet.

The December 2017 Cancer horoscope predicts that though there will be some confusion in your career, financial prosperity will be excellent.