Scorpio August 2017 Horoscope predicts that the planetary power is indicated in the Northern sector of the horoscope and the House of Career is very dominant. Professional goals will prevail over domestic matters and emotional factors for the Scorpio sun sign in August 2017.

Most of the planets have moved to the Eastern half of the chart towards the ascendant sign in August 2017. Autonomy and enterprise will be necessary to attain your targets in life. You have to decide on your priorities and follow it with diligence.

The August 2017 horoscope foretells that others are not important and you have the freedom to decide on your methods. Scorpio, there is no need for compromises and you can turn others to your point of view in August month of 2017. 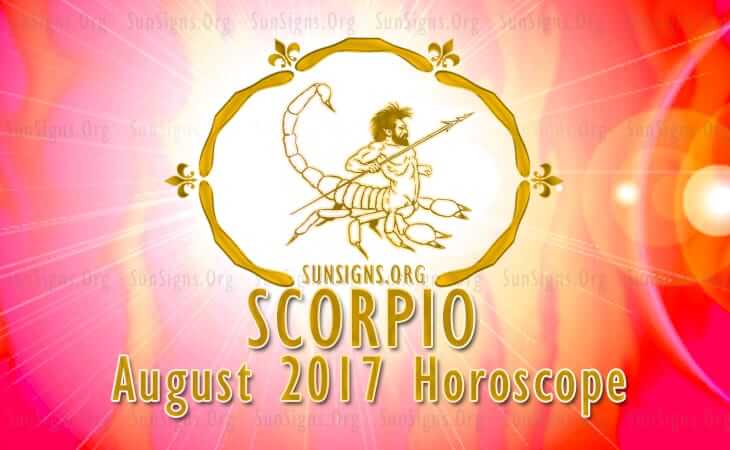 The August 2017 Scorpio monthly astrology predictions forecast that there will be slow and steady progress in your career this month. But you are moving towards your annual career summit.

Saturn in the House of Career is supportive of your career targets and adds an amount of balance to your approach. The Scorpio personality should try to incorporate the suggestions of their seniors for furthering their professional development in August 2017.

The zodiac signs predictions for 2017 foretell that finances are fabulous this month and you will be making plenty of money. You will use this excess money for philanthropic causes and social welfare. Scorpio, your habit of splurging money may create problems with your spouse or partner during the Mercury retrograde of August 2017.

The Scorpio August 2017 love forecasts predict that socially you will be very active. You will spend lot of time in attending parties and social gatherings. You will try to expand your social circle and in the process there may be problems in friendships. You should be diplomatic and try to maintain harmony in friendships in August 2017. Try this free FLAMES test.

Scorpio love compatibility will be complicated and intricate this month. You are looking for perfection in love due to planetary influences and love does not encourage precision. Single scorpions will be interested in rich partners or will be looking for pure romance in their partners. Pregnancy in Scorpio marriages can be an issue for serious discussion in August 2017.

The August 2017 horoscope for Scorpio sun sign foretells that health will be challenging till the 23rd due to professional stress and sexual desires. You can maintain fitness by rest and relaxation. Health will be excellent towards the end of month of August 2017.

The August 2017 Scorpio horoscopes predict that your aggression will need to be balanced with diplomacy this month.