Capricorn August 2017 Horoscope foretells that the planetary power is concentrated in the Northern sector of the horoscope this month towards the nadir sign.

The House of Career will become highly powerful after the 17th and the House of Family is weak. Presence of Venus and Jupiter in your Career House in August 2017 will enhance your professional prospects. Family and psychological aspects of life are on the back seat for the Capricorn sun sign.

There are equal numbers of planets in the Eastern and Western halves of the birth chart in August 2017. Hence the Capricorn born has to delicately balance self-assertion with collaboration. Sometimes you are autonomous and during other times your social grace is at work. Things will change frequently and it depends on your skill to manage the change in the month of August. 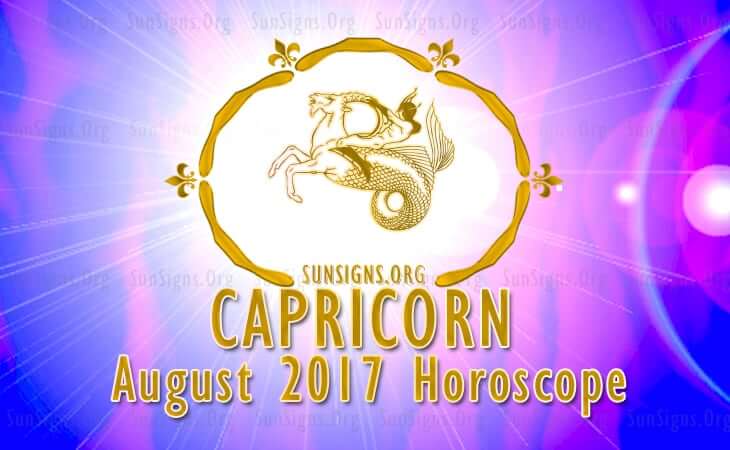 The August 2017 Capricorn monthly astrology forecasts professionally this is an excellent month for the sea goats. Career development will be superb. You have to put in lot of effort and this will be recognized by the management. You can expect promotions and change of status coupled with monetary rewards. All these things will happen after the 17th of August 2017. Problems with government authorities will be resolved amicably.

The Capricorn career growth is supported by family members in August 2017. If you are a member of a religious association or social service organization, they will contribute to your professional success.

The horoscope 2017 predicts that the financial situation is delicate as planetary support is missing for the Capricorn. This will give you the time to plan your future strategies and to get a clear picture of the present state of affairs. Earnings from career will contribute to your finances. Get your 2017 numerology horoscope.

Financial situation improves after the 23rd of August 2017. Business travel and enhancement of financial knowledge will boost your earnings. Capricorn, social contacts will help you in your monetary ventures in August 2017.

In spite of the unfavorable planetary influences like the Mercury retrograde in August 2017, love for the Capricorn personality is very much active.

Current partnerships may become permanent. Interference from the family may be a source of embarrassment in your romantic partnerships. This is also a positive month to start planning for a baby. And be sure you are not dating a loser.

The August 2017 Capricorn horoscope predicts that your health is excellent this month. This can be made better by practicing Chakra yoga and including vegetables like broccoli, cauliflower and red potato in your diet.

The Capricorn horoscope for August 2017 forecasts a month of good health and prosperity in business.