August 2016 horoscope for Libra zodiac sign forecasts that your focus should be on career issues and you should make use of the business openings you come across. You cannot ignore home and family matters and you have to take sufficient interest in these.

More than 80 per cent of the planets are in the independent Eastern sector of the horoscope during August 2016 for Libra personality. Personal enterprise and assertion will be important to accomplish your objectives. Your way is the right way and you can build your life as per your wishes. There is no need to adapt to the whims and fancies of others.

Planets Venus and Mercury are in exalted positions this month. Venus gives you recognition and appreciation while planet Mercury will drive you towards spirituality and humanitarian activities. 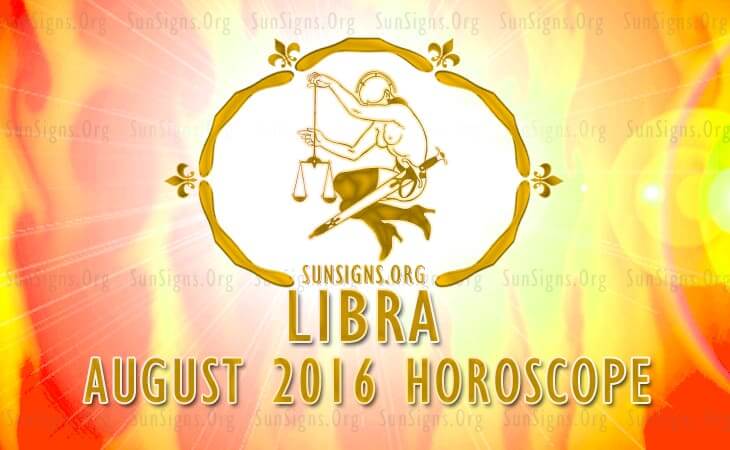 The Libra 2016 astrology predictions foretell that this month you will focus on combining career issues with spiritual ambitions.

In addition to material success in career, you are looking forward to inner satisfaction. You will be interested in philanthropic activities after doing well in business.

The August 2016 monthly forecasts for Librans suggest that your wealth situation becomes clear this month. You have to put in more effort to create monetary openings.

Planet Jupiter’s forward movement will be beneficial. You are after recognition in your financial circles and earning money will be secondary.

As the House of Friends is powerful, friendships will overtake romance in August 2016 for the Libra star sign. You will be more engaged in social activities and networking. Love will chase you this month and will happen naturally. You are looking for idealism and spirituality in your marriage compatibility.

Singles may find love in religious places or in meditation centers. Current partnerships will be under review and steps to improve them will be taken by you. Love life will face disturbances during the end of the month due to the influence of Mercury Retrograde. Libra sexuality will come to the forefront this month. Here are a few tips to take care of your pregnant wife.

The Libra 2016 August predictions forecast that health will be wonderful this month and can be further improved with proper care. Be sure to take care of your leg cramps and ankle swelling due to water retention.

To conclude, the Libra 2016 August horoscope says that be it love, business or career, you will be lucky in all these aspects.