August 2016 Horoscope for Capricorn suggests that the planets have more power towards your mid heaven sign. Career and personal achievements will be on priority. Home and emotional issues should be attended to when necessary. Improving your professional skills through advanced training and study will boost your career prospects in August 2016.

Also, majority of the planets are in the Western half towards your ascendant sign. The focus will be on social circle and their interests. Independent action and assertiveness will have to be restricted and you will get things done with the help of others. Love and social activities will be on the agenda this month.

For those Capricorn personalities interested in academics and travel, the period towards the 2016 Mercury Retrograde will be auspicious. You will be drawn towards spirituality and its secrets. 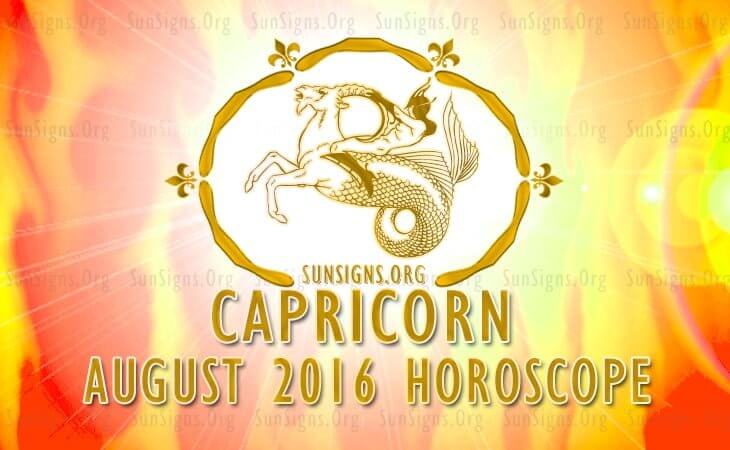 The 2016 August monthly astrology forecasts suggest that career advancement depends on your social contacts and partners.

Marriage is another way of promoting your business. Mingling with influential people and being a member of social groups will improve your job prospects.

Capricorn, though your financial planets are not benign, earnings will be more than enough in August 2016. It requires more hard work towards the end of the month.

You will have to spend more towards the domestic necessities. Relationship with your family members can be financially strained. Investments and purchases require more scrutiny. Overall monetary prospects appear to be optimistic.

The Capricorn 2016 August predictions suggest that love is excellent this month. But it will be more sexual than romantic towards mid month. You will be attracted by the reputation and charisma of the person. Married couples will find their spouses more unpredictable during the month and you have to handle them more gently.

Senior members of the family should avoid dangerous activities at the end of August 2016. Sea goats in committed relationships will get married this month. It is also an auspicious month to plan for a child.

The Capricorn fitness will get much better in August 2016. Your interest in maintaining your immunity will be a major factor in remaining healthy. Vitality will increase this month. Taking a healthy lunch and healthy breakfast will boost your wellbeing. You should pay attention to purge all unnecessary things in your physical and psychological life. All addictions like smoking or drinking should be eliminated.

To conclude, the Capricorn 2016 August horoscope foretells that you will pay equal heed to personal and professional life this month.