August 2016 Cancer Horoscope predicts that the planetary strength is situated in the Southern sector of the horoscope towards the nadir sign. Cancer born individuals should divert their attention to domestic concerns and enhance their emotional health during the month of August 2016. Career issues will be in the background for the present.

Also, majority of the planets are in the Eastern half of the birth chart towards the descendant sign. Personal ambitions and enterprise will be on the agenda for the crabs. You can decide your own course of action and follow it independently without the help of others.

This month is best suited for personal enjoyment and for gratifying the Cancerian sexual pleasures and dreams. 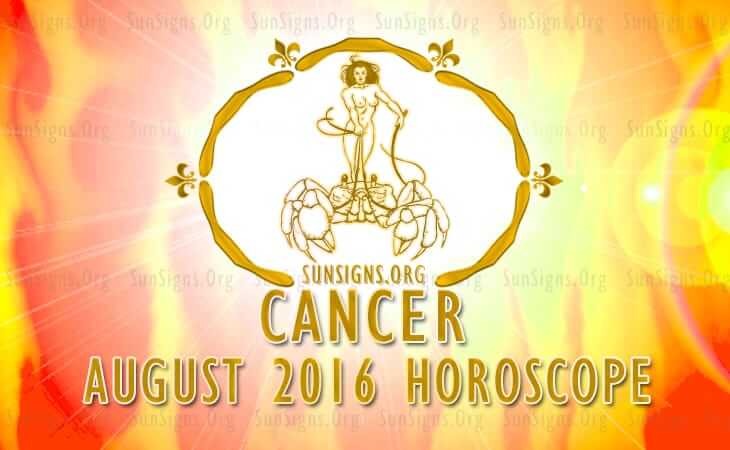 Cancer personality searching for employment should not be in a hurry to get into jobs without proper examination of the offers they get.

They will have an auspicious period towards the end of August 2016 during the Mercury retrograde.

The 2016 August predictions suggest that financially this is a great month for the Cancer birthday. Your spouse or lover and social contacts can assure you with cash flow.

Earnings can also come from your creativity, family members and social groups. You have the all-round support for your monetary projects. Financial intelligence is good and earnings can be improved by good sales promotion and marketing methods.

The 2016 love astrology forecasts for the Cancer say that August 2016 will be a superb month. Your attractiveness and charisma will be able to create many romantic possibilities. You will find love while chasing your monetary objectives or in your friend circle towards the end of the month. Dating a Cancer will be fun during this time. But pregnancy and children are better not discussed.

Your partner may be spiritually oriented and will help you in your financial ventures. All major investments and expenditures of your spouse or lover require thorough scrutiny. The financial plans of your partner have to be appraised and necessary corrections have to be made. Money flow can be irregular resulting in poor self-assurance.

The Cancer 2016 August monthly forecasts suggest that health is wonderful and can be improved further by taking care of minor ailments. Knowing health benefits of stuff in your kitchen can help you. Taking care of your canker sores and athlete’s foot will help in maintaining your well-being. You will be highly charming and fashionable.

To conclude, August 2016 horoscope predicts a time well spent with family and friends.