August 2016 Aries Horoscope forecasts that planetary strength is concentrated in the Southern sector of the chart toward your nadir sign. House of home and family is more dominant.

Arians should pay attention to domestic issues along with psychological aspect of life. With a strong emotional base, you can plan your future career development.

Aries, more than 70 per cent of the planets are in the Western social half of the horoscope towards the rising sign.

This is the time to use your social charm and social skills to attain your goals in life. Independence and assertiveness will have to be kept aside for the time being. You can have social interactions and enjoy life in August 2016. 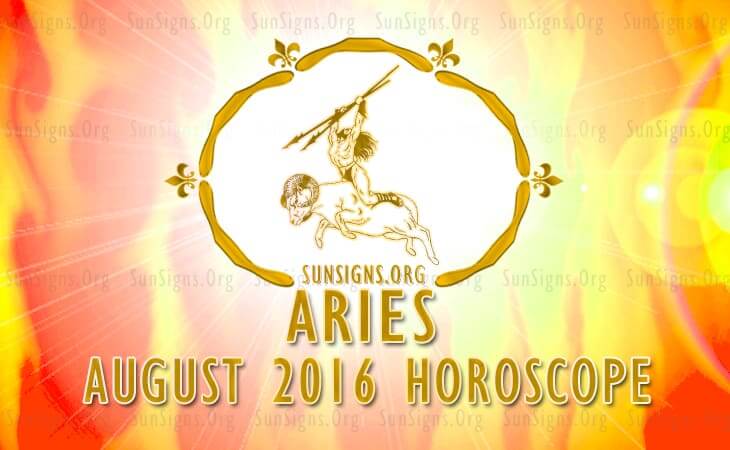 The Aries monthly predictions for August 2016 suggest that you will have many excellent openings for career growth. You are enjoying your job at the work place.

If you have grown up children, they will do well in their professional lives with promotions and financial rewards. Emotional well-being is more important than material success in career for the Rams. People seeking jobs or wanting to begin new businesses will have opportunities before the 10th January.

The August horoscope 2016 for the Aries forecast that financial earnings are fabulous this month. Business deals and family members will contribute to your cash flow till mid month. You can make money by your resourcefulness after that. You have the encouragement of your superiors and senior members of the family for your monetary ventures.

Aries personalities can take calculated risks while investing and make money with their instincts in August 2016. Investments in realty, construction industry related to housing will be highly profitable.

The Aries 2016 August love zodiac forecasts predict that there will be more rationality in matters of love this month. Relationship with your spouse will be quite sensitive and you have to be very careful in handling your marriage. You will be looking for encouragement and psychological help from your lover or spouse till the mid month.

Married Arian couples will have more fun and entertainment during the second half of the month. Single Arians will find romantic and sexually stimulating opportunities while holidaying together or while having fun. In August 2016, relationships are more for enjoyment. So do not expect any commitment from your partner. This is also not a serious time for pregnancy.

Health will be fantastic this month for people born on Aries birthdays. Your interest in fitness and nourishment routines will boost your health automatically. It pays to take care of minor problems to your health promptly with simple home remedies. Be it a leg pain or stomach ache, do not neglect it one bit.

To conclude, the Aries horoscope August 2016 predictions indicate a lively and happening month with excellent scope for planning for the future.