Taurus April 2017 Horoscope predicts that professional matters will be in focus during the first three weeks of the month. In the last week of April 2017, you will have enough time to relax. You can use this period to enhance personal image and fulfill special desires. The Taurus personality should be able to harmonize their career and other interests.

Planetary strength is located in the Eastern sector of the birth chart in April 2017 for the Taurus zodiac sign. Your independence and initiative will be in full swing. You can go ahead with your plans to accomplish your goals and force things on others. There is no need for the bulls to be adaptable or seek social grace.

It is advisable for the Taurus born to reduce their activities during the Mercury retrograde of April 2017. All major decisions should be avoided during this period. 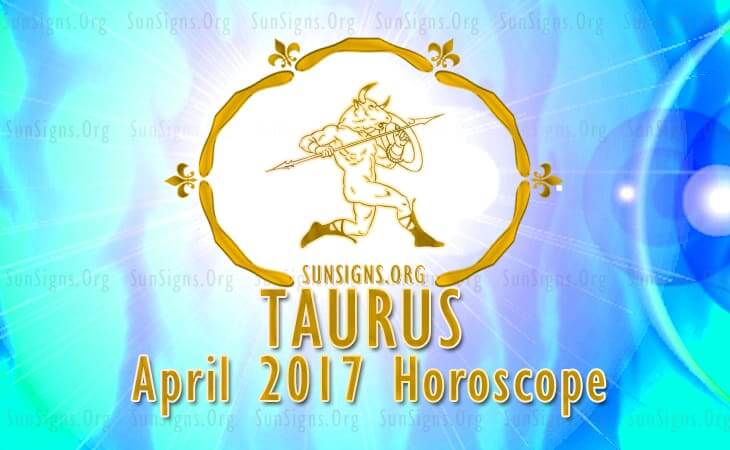 The 2017 career horoscope for the Taurus sun sign predicts that your profession and business can improve with some networking. The first few days of April 2017 will be pretty hectic with important assignments and deals being signed.

The 2017 astrology predictions forecast that there will be gradual increase of monetary wealth for the Taureans as the month progresses. Planetary aspects are favorable for finances and your financial intelligence will be powerful.

Spirituality will play a major role in your financial dealings this month. You will get hunches from visions and intuition regarding your investments. You will be generous enough to donate money for humanitarian causes and charities in the month of April 2017.

Marital life and relationships for the bulls will be under stress in April 2017. All problems in relationships will show up. Strong alliances will successfully overcome the turbulence and weaker ones will wither away.

The 2017 April predictions forecast disturbances in the family due to the effect of the Solar Eclipse. Things will be clarified and everything will come to a happy conclusion by the end of April 2017. You will get news of birth of a child in the family.

Single Taurus natives will have ample prospects for getting into love relationships in April 2017. Finding the right online dating sites can make your task easier.

The April 2017 Taurus monthly forecasts predict that your physical fitness will be wonderful during the month and can be enhanced by body massages.

Health improves further after the 20th. Confidence is very high and you will be more pragmatic. Personal allure and magnetism will be very high in April 2017. Fuller’s earth, cucumbers and aloe vera can give you that perfect complexion.

The April 2017 horoscopes for the Taurus zodiac sign forecasts that this is a month to concentrate on your job rather than on your relationships.