Cancer April 2017 Horoscope foretells that this will be a month that seems like a yo-yo to the crabs. Sometimes your enterprise will be stronger and during other times you will have to seek the cooperation of others.

Thus you have to juggle between conflicting areas of interest. Both autonomy and social grace are equally important this month for the Cancer star sign. 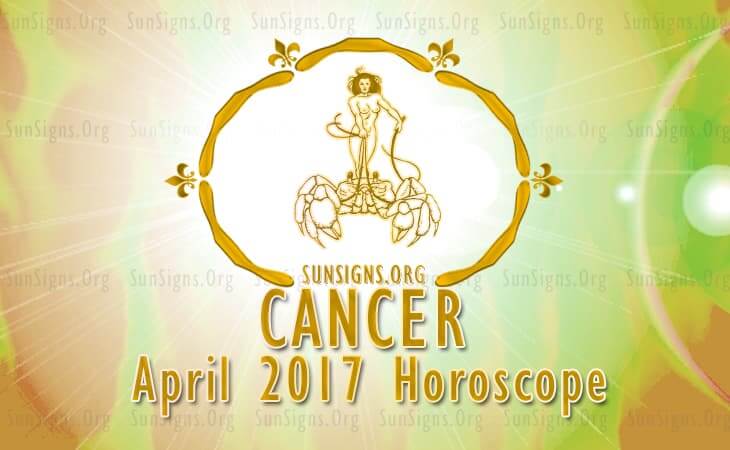 The 2017 astrology predictions forecast that career will be in focus for the Cancer personality in April 2017. You will see plenty of growth and activity. Social connections will be important for the progress of your career and business.

Professional environment is strongly and adversely affected by the Solar Eclipse of April 2017. The corporate structure of your organization will undergo major transformations and you will be directly affected by these changes. Cancer, you may go for a new job, or the nature of your job may change in the present office in the April month 2017.

The April 2017 Cancer monthly horoscopes predicts that money will come from your profession, family and friends, governmental sources and your corporate contacts. It requires extra effort to keep the cash flow intact. Towards the end of April 2017, social contacts and associations will help you in getting your finances.

Investments in property will give good returns to the Cancer born in April 2017, but sufficient research is necessary.

The Mercury retrograde of April 2017 will bring out the flaws in your relationship with senior family members. Communication between couples is essential for a happy married life. You will have to work towards resolving these differences and bring about harmony in the family atmosphere.

The 2017 monthly predictions forecast that the Lunar Eclipse of April 2017 will impact your relationships with your children. Existing love affairs will be under stress. Love partnerships will prosper towards the end of April 2017. Pregnancy related questions will keep you busy in April 2017.

The Cancer horoscope for April 2017 forecasts that your health will be problematic till the 20th and will improve after that. You have to work smartly and conserve energy by doing only necessary things.

There will also be a major change in your nature and external looks. Internal cleansing of your body also is important. Having a glass of white wine or a few walnuts everyday will give you good skin.

The April 2017 horoscope for the Cancer zodiac sign predicts a month of opposing interests which will require you to take important decisions.