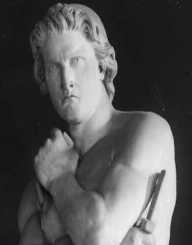 Roman gladiator Spartacus was probably born in Thrace around 111-109 BCE. He hailed from the Thracian tribe of the Maedi, who inhabited today’s Balkan region. The region is now part of the present day south-western Bulgaria. According to the common belief, Spartacus served in the Roman army in his youth. He is thought to have abandoned the army and resorted to robbery. Roman Army arrested him and held him in confinement. They later sold him as a slave.

While in the captivity, Spartacus received gladiatorial training in the school situated at Capua, North of Naples. He along with 70 other slaves hatched a conspiracy to escape from their detention. They fought the soldiers who were keeping an eye on them and forced their way out from the captivity. Spartacus and his companions successfully stormed out of the training facility. They stole whatever valuables they could lay their hands on. Among the booty, there were wagons full of arms and ammunition as well as other valuables stolen items. They increased their manpower strength along their way. Finally, the group reached Mount Vesuvius, a live volcano. Spartacus made Mount Vesuvius as their hiding place due to its strategic location. Thereafter, he started preparing his men to take on the Roman Army for a final assault.

The absconding gladiators and other outlaws chose Spartacus and two other Gallic slaves as their head. The army consisted of mainly the runaway slaves. Soon, the strength of their army reached to a substantial number of around 1,00,000 men. They defeated two successive contingents of Roman forces consecutively. The unique fighting strategy adopted by Spartacus and his men stunned them into submission. The army of the gladiator slaves climbed down the cliff side of Mount Vesuvius and unleashed a sudden attack on the unprotected Roman camp. This move surprised the advancing Romans completely. The attack came from behind the camp and led to the death of most of the Roman soldiers. With equal finesse, the revolting army of slaves also defeated a second attack by the Romans.


DISPLAY OF EXPERTISE IN MILITARY WARFARE

The tactics adopted by Spartacus in mobilizing his resources proved his expertise in such military warfare. He commanded his army and advanced to northward after training hard during the winter of 73-72 BCE winter. Using the locally available resources in the best possible manner and adopting some exceptional tactics, they faced the trained, skillful contingents of the Roman army. The Roman army dispatched two consular legions to defeat Spartacus and his men. In the initial round, they found success by defeating a 30,000 strong group of rebel army. It was done under the leadership of Crixus, a Gallic slave.

The conflict took place near Mount Garganus. However, the joy of defeating the rebels proved to be short-lived for the Romans. Soon, Spartacus defeated both the consular legions. With this victory, Spartacus captured most of the southern parts of Italy. He advanced northwards to wrest the remaining portion of Italy. Roman general and politician Marcus Licinius Crassus took charge of another eight consular legions to rein in the advancing Spartacus. The total strength of all the legions together was around 40,000.

Spartacus started heading towards the Alps. His intention was to send his men to their respective native lands. However, they declined to leave Italy. Realizing the imminent threat from the Romans, Spartacus came back to Lucania. His intention was to cross over to Sicily along with his forces. However, things became a bit difficult. Crassus, with the help of the strength of his forces, successfully restrained Spartacus from further movement. With no chance of any forward movement, Spartacus had to retreat to a place called Rhegium. Rhegium was located near the Strait of Messina.

Spartacus made a desperate arrangement to flee to Sicily with the help of Cilician pirates. However, Cilician pirates deceived him. They took the required payment for the purpose but later left him in the lurch. The advancing strong Roman forces gradually cornered Spartacus and his army men. Spartacus fought his final battle in around 71 BCE. The war took place in a place presently called Senerchia situated on the right bank of river Sele. Spartacus fought a pitched battle with the Roman army and ultimately succumbed to his injuries. His body was never found for cremation. Later, the legions of Crassus captured and crucified six thousand of his rebel forces.