Virgo September 2017 Horoscope predicts that the planetary strength during the month of September 2017 moves to the Southern sector of the horoscope. Hence the emphasis will be on family concerns and emotional stability. Career will be in the background for the Virgins, but cannot be ignored.


Virgo, your 2017 monthly horoscopes predict that majority of the planets in the Eastern half of the chart. You have the liberty to change your life as per your own wishes and attain your objectives in life. You are not dependent on others or situations and there is no need for making any compromises. This is further assisted by the strength of your own Virgo star sign in September 2017.

Virgo passion and sensuality will be very powerful in September 2017 and you can use this for personal corporeal desires. Physical needs dominate over other aspects of life and you have to give due cognizance of this facet of life. This is accompanied by personal allure and charm to attract others. Read about Virgo sexual traits. 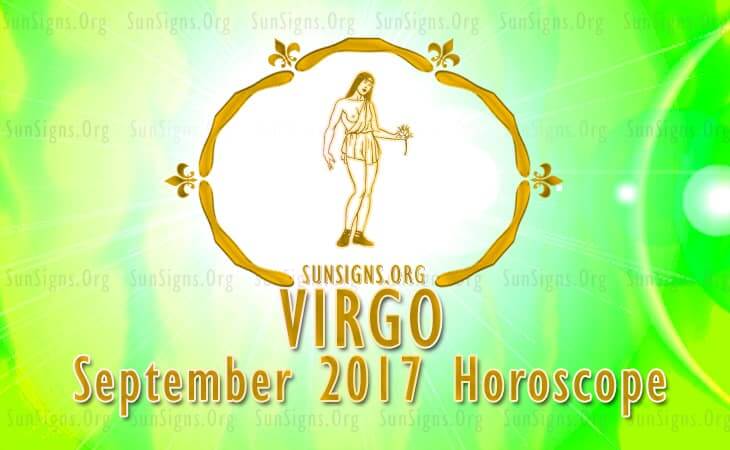 The Virgo career prediction 2017 by date of birth foretells that nothing much will happen on the professional front in September 2017. You can make an analysis of your job or business performance over the past one year and make corrections to have a more successful future.

The September 2017 astrology forecasts for the Virgo sun sign predict that monetarily this happens to be a highly prosperous month. You can expect unexpected flow of money from unknown sources.

Family members will help your fiscal ventures and you have plenty of chances for forming new business partnerships to boost your earning capacity. Virgo, you will have enough money to splurge on yourself in September 2017.

The 2017 romance horoscopes foretell that love opportunities for the Virgo star sign will crop up during the first week of September 2017. Commitment in the Virgo compatibility will be lacking in relationships.

They may have a bearing on your monetary prospects while development of love takes time to fructify. Pregnancy related matters too will get delayed for the Virgo in September 2017. But socially you will be quite active.

The Virgo September 2017 zodiac forecasts that health will be fabulous this month. You will focus on maintaining your fitness with good exercise and diet plans. Read more about Virgo fitness. This will result in improvement of your personal outlook and will enhance your confidence and vitality.

The September 2017 horoscope for Virgo predicts a month of independent decision making which will be concentrated on your relationships.