Scorpio September 2017 Horoscope foretells that most of the planets are in the Northern sector of the horoscope and the House of Career is dominant. You should focus on your professional objectives and allow family and psychological issues to rest for a while. Your professional success will add to the happiness of the family in September 2017. Scorpio, you will have the encouragement of the family members.

Scorpio, more than 60 percent of the planets are in the Eastern part of the chart and the House of Self will become powerful on the 11th. This is the time for autonomy and strong actions. You can decide the course of action and follow it persistently. Social grace and charm are not necessary for the Scorpio star sign in September 2017. You have the power to change situations to your advantage.

Spirituality plays a powerful role in September 2017 in the life of the Scorpio personality. It will govern your professional life, financial matters as well as your relationships. You will get an insight into the various aspects of your life through religious leaders and spiritual masters.

The intuitive faculties of the scorpions will be robust and you will experience psychic events and dreams. Spirituality will naturally draw you towards charitable activities and social service. You will spend time in September 2017 in spiritual gatherings and sanctuaries. 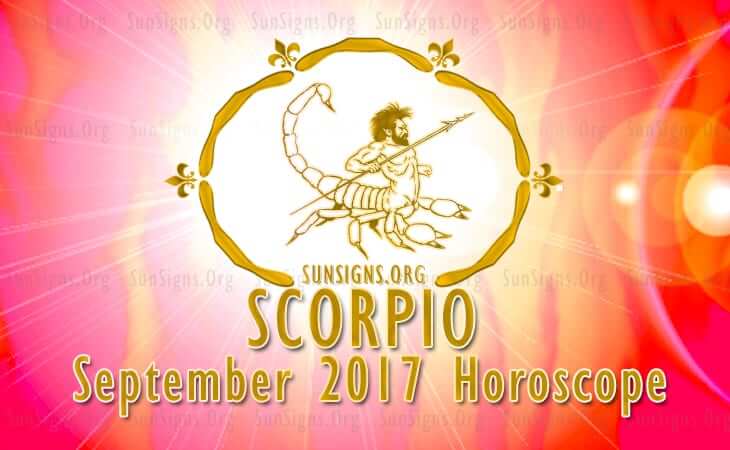 The September 2017 Scorpio astrology forecasts predict that professional environment will be challenging, but you will be able to manage the situation with your spiritual strength. Professionally you will prosper with monetary rewards. Your status will improve in your business or career. You have the support of the management and partners in getting new projects in September 2017.

The Scorpio September 2017 monthly horoscope predicts that financially you will flourish this month and there is a spiritual angle to that. You will get new monetary openings at spiritual seminars or while doing philanthropic activities. First week of September 2017 is propitious for forging new commercial partnerships for the Scorpio born.

The Scorpio love astrology for September 2017 predicts that you are very active in chasing love, but love will be after you and you will form love partnerships by the 11th. Love has a spiritual angle and you will find love mates in spiritual gatherings. You will also be interested in dating a person who is deeply spiritual. Even pregnancy will be planned keeping your mystic interests in mind.

Love is to be found for the Scorpios in September 2017 in their professional environment. You are likely to ask a guy out during social parties.

The Scorpio zodiac predictions for September 2017 foretell that this is a month to concentrate on losing weight and reducing that belly paunch. Be sure to go for regular checkups. Do not ignore issues like foot fungus or pressure ulcers as they get serious if left untreated.

The September 2017 Scorpio predictions forecast a period of spiritual enlightenment and self-reliance.