Pisces September 2017 Horoscope predicts that most of the planets will be in the Northern sector towards the nadir sign. Planet Jupiter is also helpful for your career growth. Hence professional matters will prevail over family and emotional matters. Pisces, you cannot ignore domestic issues altogether and you may have to do the needful from time to time in September 2017.

Pisces, planetary power is in the Western half of the chart towards the rising sign in September 2017. This is not the time for asserting yourself with strong actions. Things require social help and you can accomplish things with the help of others. 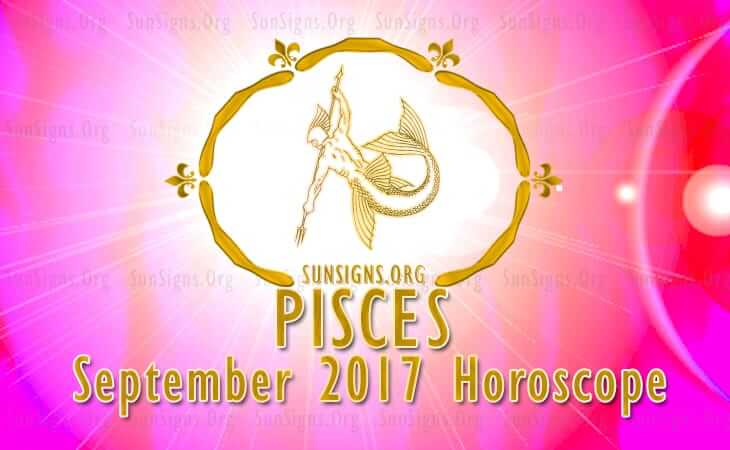 Compromise and partnership are the keywords for September 2017 for Fishes sign. You have to accept the problems arising out of situations and be happy to see the things move smoothly.

The Pisces September 2017 astrology predictions forecast that whatever you had visualized earlier about your career can be implemented this month. You will have the encouragement of seniors and influential people for professional development. Your social network also will further your career prospects in September 2017. You can expect a change of status in your job and monetary rewards will follow.

Money flow for the Pisces sun sign is sufficient in September 2017 but requires plenty of effort. You are not happy with the means you are adopting to make money. Conflicts with friends on monetary matters are expected in September 2017. Your love partner will augment your finances and you will get money from investors and insurance. The Pisces personality will have no problem in getting finance for expanding their business in September 2017.

The Pisces September 2017 monthly horoscopes foretell that your social charisma is strong till the 22nd. You will have no problem in finding romantic associates. Your relationships will be influenced by Sun, Venus and the Moon. You will have many opportunities for serious love, marriage and pregnancy. You also have the power to identify true love. Read about Pisces compatibility.

The September 2017 Pisces zodiac predictions forecasts that health requires more care this month and may be affected by your social life. You can further your health by maintaining harmony with your friends and partners.  You can remain physically fit by detoxification and by moderating sexual activities. Reduce your stomach fat for a healthy future.

The September 2017 horoscope for the Pisces zodiac sign foretells of a period of execution of plans in your professional and personal life.