Libra September 2017 Horoscope forecasts that spirituality will be a prime factor this month because of the presence of Sun in your house. Connecting with the Supreme Power will make you emotionally stable and powerful. This stability will be of great help in confronting the various problems that are staring at you. Your interest in spirituality will take you to various religious places and conferences in September 2017.

Libra, you will take special interest in social service and charitable activities. You will work actively with the organizations which are helping the deprived and the poor both financially and psychologically in September 2017. These activities will give you a sense of settling your past actions which might have created distress to others.

The 2017 September horoscopes predict that planet Venus has a strong influence on the fortunes of the Libra zodiac sign this month. Your sensuality will be extremely high and you will indulge in physical enjoyment to enhance your happiness. Planetary aspects point to extraordinary happenings in your family, business or in your organization. You will be showered with all the affluence in September 2017 and this has to be used for a social cause.

In September 2017, the Libra man or Libra woman is at the mercy of various contrasting powers and personalities. Family situations, personal priorities, health concerns and marital happiness are acting simultaneously. You will have a problem in bringing a semblance of stability in your life. Your efforts should be concentrated on tackling the various concerns at the proper time in this month of September. 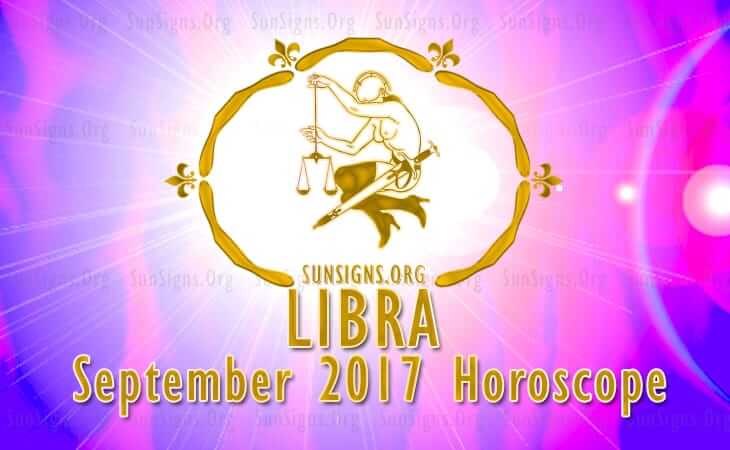 The September 2017 Libra monthly horoscope predicts that you will be assisted by the Moon in your professional field through visions and supernatural events. Pay heed to psychic messages for progress in your business too.

The September Libra 2017 monthly zodiac forecasts predict that Venus stimulates your social activities this month. You will have pleasant relations with your friends. It will also throw light on the spiritual aspect of friendships. Mars, Jupiter and Mercury will help you to connect to people intuitively and through mystical powers. Read about Libra compatibility.

Libra, you will have plenty of romance this month in September 2017 and love will chase you. Single Librans are likely to get into committed love partnerships or even marriage. Married couples can plan for a child in September 2017.

The Libra health is up to the mark in September 2017. It can be boosted by attending to the various problems promptly with simple natural home remedies. Good fitness is necessary for maintaining your mental poise. Spirituality has a positive impact on your personal image and physical health. Include asafoetida, chia seeds and chestnuts in your diet.

The September 2017 Libra horoscope predicts a month of spiritual awakening and intuition.