Leo September 2017 Horoscope foretells that more than 70 percent of the planets are in the lower half of the horoscope and the House of Family becomes very powerful after the 11th.

Hence it is natural that you are looking for harmony and peace in the family environment. The Leo star sign will also aim for enhancement of psychological strength in September 2017.

Leo, the planetary strength is located in the Eastern half of the chart towards your rising sign in September 2017. Hence your autonomy and initiative will be at the fore and you can decide on what you want in life and go after them in September 2017. 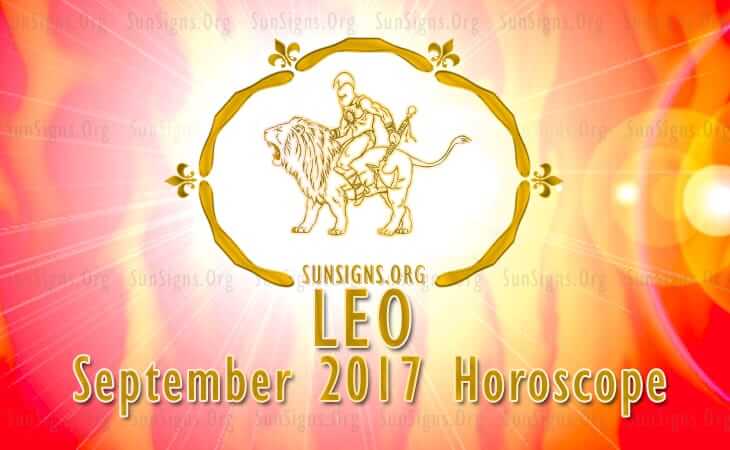 The 2017 astrology forecasts warn that presence of Mars in the House of Career will induce aggression in the Leo’s professional life. There will be radical changes in your business dealings. There will be turmoil in the corporate structure and you may be forced to work hard to survive in your present position in September 2017.

The Leo personality may even move to another job or start your own business venture. All these things require a stable and powerful mind which you have because of your planetary positions. Foreign travel for business purposes is also indicated in September 2017.

The September 2017 Leo zodiac predictions forecast that monetary situation is robust for most part of the month. Your financial intelligence is good which will enable you to take the right decisions when required. The Moon will provide you all the clarity required regarding financial ventures.

The Leo earnings can be improved with proper marketing strategies and by using innovative techniques. You should strive to enlarge your knowledge base regarding money matters which will be instrumental in financial growth. September 2017 is not auspicious for new business associations for the Lions.

The Leo September 2017 monthly horoscope predicts that you will have many opportunities for forming romantic relationships this month. But you should be careful before getting into serious commitments. Influence of Venus and Uranus is felt in your personal charm and outlook in Leo compatible relationships. Pregnancy and children related issues will need your attention in September 2017.

Leo, your social life will be active in September 2017 and you may get into an affair with a senior person. Marriages should be avoided this month. Single Leos can look for love closer to home in family circles. Prospects for romantic Leo alliances brighten after the mid of September month 2017.

The Leo horoscope for September 2017 foretells that health is quite delicate and you have to take care with enough rest and relaxation. Your vitality is low and you should take steps to conserve your energy. You should attend to important things and delegate minor things to others for execution. You can improve your well being by using the health benefits of common kitchen ingredients.

The September 2017 Leo horoscope predicts a period of assertion and independence.