Aries September Horoscope 2017 foretells that most of the planets will move to the Northern half of the horoscope towards the nadir sign. Hence this is a transitional month when your priorities from domestic concerns will change over to professional goals. Aries, you can use your emotional strength to accomplish your objectives in September 2017.

Planetary strength is at its peak for the Aries star sign in the Western half of the chart towards the descendant sign. Social contacts and help from others will play a major role in your worldly success in September 2017. 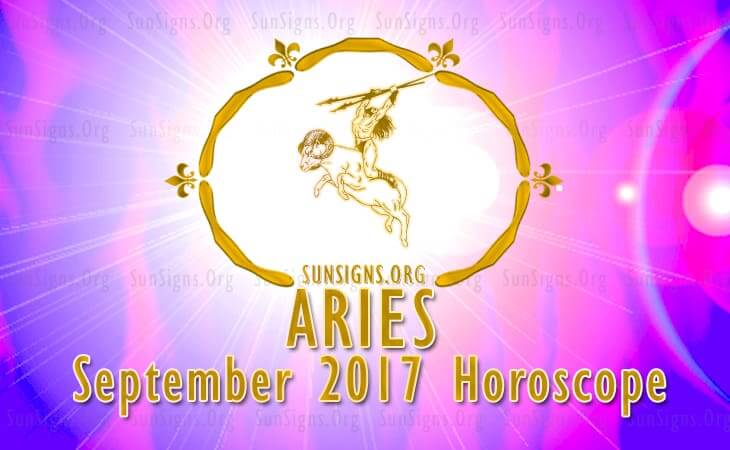 Interest of other people comes first and you have to go with the situation. Consensus and collaboration will be the keywords this month for the Aries personality in September 2017.

The 2017 astrological predictions forecast that career will be a major factor in September 2017 for the Arians. Job environment will be harmonious and planetary influences will be helpful in attaining your career goals. Your judgement will be quite extraordinary and you will make great strides in your profession. If you are an Aries person looking for a job or planning to start a new business, you will be successful in September 2017.

The September Aries 2017 monthly zodiac forecasts this is a wonderful month for your monetary accomplishments. Planet Venus and planet Jupiter will bring you lucky money. Planet Mars will help you to focus and achieve financial success in your ventures. This is a good time for forming new partnerships. Your family members and social contacts will be always willing to boost your fiscal prosperity in September 2017.

The financial success of the rams will improve by helping others to become richer in September 2017. Surplus money should be used to pay off pending loans. Period after the 11th of September month of 2017 is highly propitious for new investments and financial projects.

The 2017 love horoscope for the Aries sun sign foretells that the House of Love is very dominant with highly influential planets in September 2017. Love will be a significant factor and will be chasing you. You are able to draw your romantic partners with your charisma. Marital life will be highly sexually passionate and can even lead to a pregnancy. Read more about Aries sexuality.

Single Arians will have chances of marriage after the 6th of September 2017. Love will be full of excitement and fascination. Lot of time is spent in attending social parties and marriages. You tend to seek perfection in your lover which may limit your choice of dating.

The Aries horoscope for September 2017 predicts that your health will be excellent till the 22nd and after that certain amount of caution has to be exercised. Proper exercise and diet regimes will help your fitness. Emotional health is as much important as the physical health, and can be enhanced by meditation and social service. Test your daily biorhythms here.

The September 2017 Aries horoscope forecasts that this is an emotional month for the Rams with career being your main focus.