Aquarius September 2017 Horoscope forecasts that the planetary power is concentrated on the Northern sector of the horoscope (nadir sign) and the House of Career will become dominant. Professional matters will become prominent while family and emotional issues get the due they deserve in September 2017.

From the 11th of September 2017 life becomes complicated for the Aquarius sun sign due to planetary influences. You will have to face various challenges in life from different fields and this will lead to plenty of confusion and tension. In the end things turn out to be in your favor in September 2017. 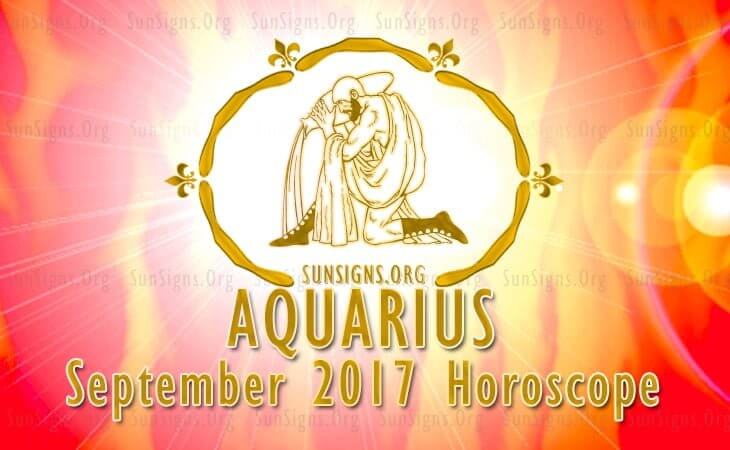 The September 2017 Aquarius astrology forecast that with the favorable movement of your Career Planet Pluto on the 2nd, professional development will be swifter. Your business intelligence will be powerful. You can fix your professional targets and try to achieve them.

Mars will help you to grow professionally with your communication skills. Pluto is also favorable for the professional growth of the Aquarians in September 2017.

The horoscope 2017 prediction for the Water Bearers shows that spirituality plays a major role in your finances this month. You should balance your spiritual and money interests to be financially successful. You can improve your earnings by helping others to become more prosperous.

As planets are not favorable, efforts to improve your personal finances may not be successful in September 2017. You should analyze your expenses and eliminate all unnecessary spending to improve your fiscal balance sheet.

The Aquarius monthly horoscope for September 2017 foretells that you will enjoy good love relationships. Love will be more physical than romantic. There will be sexual problems in an on-going relationship. Read about Aquarius sexual traits. And you have to take a call on continuing the partnership with your spouse. Pregnancy for the Aquarius too needs to be planned afters some careful thinking in September month of 2017.

The September 2017 zodiac predictions for the Aquarius star sign forecast that health will be good and will improve further. It pays to attend to minor health problems promptly. Your vitality will be strong and you should exercise caution in sexual matters. Health can be enhanced by cleansing your body of impurities and toxins and by becoming aware of general health. You can try to get rid of all undesirable habits like caffeine addiction, quit smoking and alcohol addiction in September 2017.

The September 2017 Aquarius horoscope predicts that both career and relationships will need your equal attention this month.