September 2016 Scorpio Horoscope predicts that the eclipses this month are beneficial for you. The Lunar Eclipse will impact your current love relationships. Children will face major turbulence in their lives which will result in change of schools, marriage or change in personal image. This will have an effect on your relationship with them. Changes in your spiritual beliefs and religious organizations are predicted.

Scorpio, your home will undergo major renovations and beautification. Conflicts with parents are likely. Students are also affected by the eclipse.

The Solar Eclipse in September 2016 will make alterations to your spiritual life and humanitarian activities you are involved with. Friendships and family relationships for the Scorpions will be under trial. 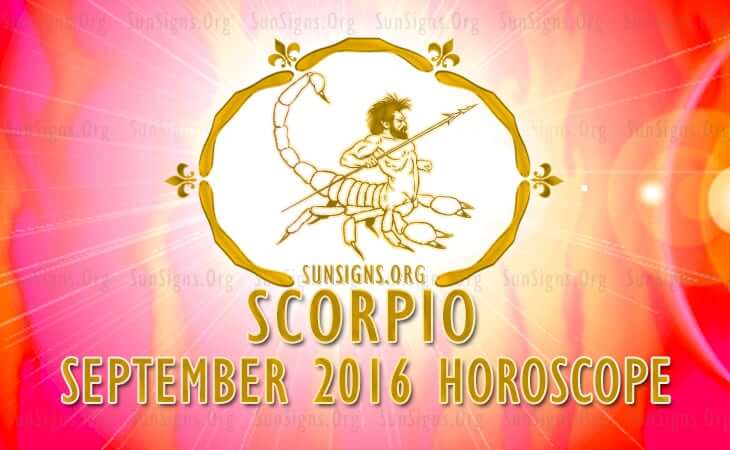 The Scorpio 2016 monthly predictions foretell that you will come in contact with powerful people who will be instrumental in the progress of your career. There will be profitable job changes or financial rewards this month. In the third week of September 2016, career and business growth can be achieved by involvement in spiritual and humanitarian projects.

The 2016 astrology forecasts for the Scorpio zodiac sign predict that your financial planet Jupiter will be shifting to Libra this month end. This will affect your finances over a long period of time. Your financial instinct will be a major factor in fiscal growth. Engaging yourself in philanthropic activities will indirectly boost your prosperity. Monetary decisions will be made after thorough examination.

Money for the Scorpios will flow naturally without much hard work. Money from unexpected sources is likely in the last few days of September. You have the wholehearted support of your family in the financial ventures.

The Scorpio zodiac predictions for September 2016 suggest that until the 7th, love is limited by your coldness and apprehensions. After that, Scorpio love will become more romantic and carefree. Single Scorpio men will look for influential people who can assist them in professional growth and improvement of position.

You will have harmonious relationship with family members if you accept them as they are and avoid being critical about their behavior. Married Scorpio sexuality will be passionate and pregnancy might be on the cards.

Scorpio fitness and health is magnificent during the month of September 2016. You will be attracted to spiritual healing techniques to overcome health problems. Your vitality will improve drastically and will boost your overall health immensely. Weight loss programs will prove to be beneficial for you.