September 2016 Horoscope for Pisces zodiac sign predicts that professional commitments will dominate over home and emotional concerns this month. You can execute your career plans if you can overcome your emotional barriers.

Planetary strength is in the Western half of the horoscope for the Pisces born. Support from people is required to attain your goals in life. Interest of others will prevail over self interest. Adaptability is very important in September 2016 and the Fishes to adjust to situations and people.

The Lunar Eclipse in September 2016 will change your personal image and outlook. Your religious beliefs will be under threat and you will be forced to make changes. Cleansing your body of impurities will be necessary to maintain your health. Children will make major transformations to their personality and this will have a bearing on the parent child relationship.

The Solar Eclipse will put the Pisces relationship with their spouse or lover under stress. Real love will overcome these disturbances. Changes in job are likely and they will be positive. Diet and health plans will see major changes over a long term. 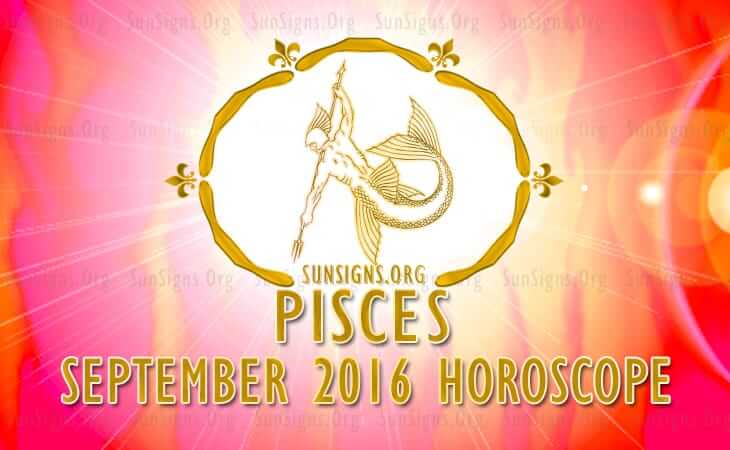 In September 2016, major alterations in career profile are indicated for the Pisces people. There will be more growth and recognition.

Helping others to succeed will help your business grow further.

The September 2016 zodiac predictions for Pisces suggest that your earnings depend on your pleasant relationship with others. You will have the support of your spouse or love mate and your friends in monetary ventures. New business deals are made when you meet people in social gatherings. Your spouse will have good monetary success and will be financially helpful to you.

The 2016 love predictions foretell that socially September 2016 is an excellent month for dating a Pisces. If you are looking for new romantic opportunities, you will have plenty of them.

Pisces men and women will find love while you are chasing your financial and career objectives. People in serious relationships are likely to get married. Married couples are likely to plan for a baby. Your love planet Mercury will help you have clear ideas about love and friendships. Do not become that possessive boyfriend or girlfriend who scares away their lover.

The Pisces fitness and vitality will be very high in September 2016. You can use this period to get rid of all unnecessary excesses, both physical and emotional. You can get rid of harmful addictions. Health will be delicate till third week. Be sure to do away with all aches and pains.

To conclude, the Pisces horoscope for September 2016 foretells that career and finances will be excellent but you need to take care of your health too.