September 2016 Capricorn Horoscope foretells that career issues will be of significance this month. Your preoccupation with your profession will leave domestic concerns in the back burner. However, your family is supportive of your career objectives. Your success will be your family’s success.

The Capricorn born people will be more independent as the month progresses. You can decide your goals and work hard to achieve them without social support. There will be significant career changes that will also affect your relationship with your parents. Students will have to make necessary changes in their academic field.

The Sea Goats who are spiritually inclined will get more opportunities to boost their awareness and inner stability. Travel and academic activities will occupy your spare time during September 2016. 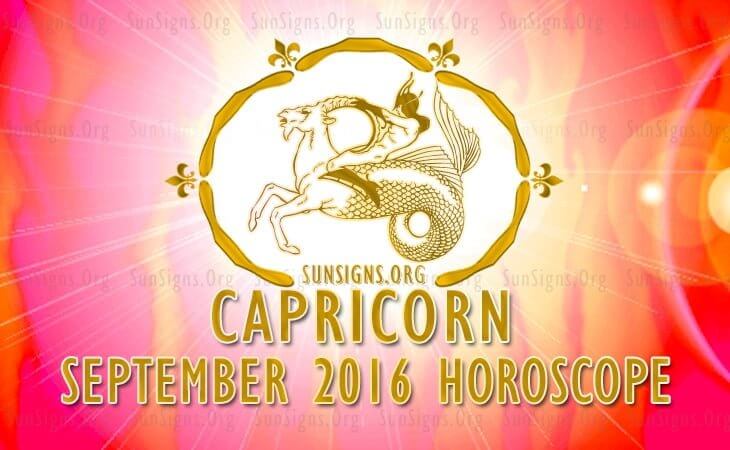 The 2016 monthly astrology forecasts for the Capricorn zodiac sign predict that career is set to zoom this month in September 2016. Whatever changes that happen will affect your professional life in the long run. In addition to your skills, your social contacts play a major role in your business growth.

Capricorn, your success in your job involves lot of hard work and you will face stiff competition in September 2016. There will be improvement of status coupled with financial rewards. You may even switch over to another company to improve your prospects. Your career perspective is enhanced considerably and you are now looking at a larger picture.

The 2016 September Capricorn predictions warn that finances are delicate this month. All major purchases and investments require scrutiny. It is advisable to hold back these expenses for the time being. Monetary situation will be challenging till the 22nd and show signs of improvement after that.

Beginning of September 2016 is conducive for Capricorn love affairs. After that career activities will be a hindrance for love. Love can be enhanced by engaging in more social activities in addition to career.

Sexual passion will not be the focus this month. Your family will be waiting for the birth of a child.

Capricorn fitness and health will be normal for most of the month. A healthy diet plays a major role in the maintenance of your health this month. Muscle pain and burning feet might trouble you this month.

Overall the Capricorn September 2016 horoscope forecasts a professionally satisfactory month with complete support from your family.