2015 is beneficial for the growth of Rabbits as the combination of powers of Goat and Rabbits will have a positive outcome on Rabbits. There is an overall growth in the lives of this Chinese zodiac sign.

The Rabbit 2015 Horoscope predicts that in the Year of the Green Wood Goat, the Rabbits will pursue their artistic talents in music or dance. But you will have to be sensitive to the feelings of other people in order to avoid misunderstandings.

Rabbit in 2015 Chinese astrology will basically like social activities. They like to spend their time with their friends and contacts. But in 2015, their social interactions will be limited due to the planetary influence of Wood Goat.

Though Rabbits are not inclined towards religion and philosophy, Year 2015 will force them to look at their inner selves deeply.

Rabbit 2015 horoscope predictions foretell that partnership businesses will thrive. If done in association with people belonging to compatible zodiac such as Rabbit, it will be better. Taking professional help to improve and diversify businesses will yield good results.

Professionals will have excellent growth in their careers during the year. The period after September appears to be good for getting recognition and rewards.

2015 Chinese horoscope predictions for Rabbit forecasts that monetary prospects are superb. For people born in the Year of the Rabbit in 2015, prosperity in businesses is forecast. Expansion of product range and improvement in interaction with customers will reap good benefits. This will automatically lead to increase in income.

Though earnings exceed expenditure in 2015, surplus money should be put in realty or secure deposits which will come in handy in times of financial difficulties.

Rabbit 2015 predictions foretell that new love will bloom with people from your social circle. 2015 promises to be a happy year for lovers. These alliances will happen during the last few months of the year. Minor disturbances in relationships are predicted and these things should not be allowed to linger for a long time.

2015 Year Of The Rabbit Forecast For Family

Rabbits seek comfort and peace in the company of their spouses and children during 2015. Due to the influence of Goat, social partying and celebrations will be curbed. Family members will give wholehearted support to Rabbits in times of psychological turbulence.

Rabbit 2015 Horoscope predicts that you will not be interested in travel during 2015 either for business or holiday travel. You will find domestic environment to be soothing and peaceful. 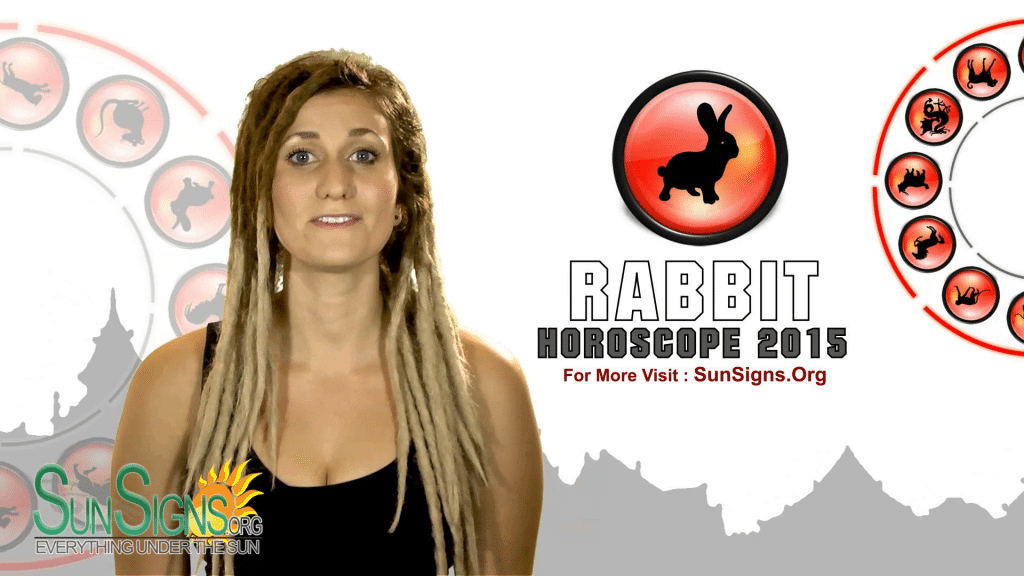 Rabbit 2015 Horoscope suggests that you should concentrate on enhancing your mental health during 2015. Rabbit men should be careful about accidents, while no health problems are forecast for the women.

The Rabbit Chinese sign will do very well this year provided you tread with care.