Pisces love Horoscope 2016 forecasts that the focus in the year 2016 will be on profession, religion or spirituality and wealth creation. Social activities are dictated off and on by the influence of planets. Houses in the birth chart controlling your love and social life are not dominant enough. You will be happy with the way things are currently in these areas.

Your social life depends on your own initiative as planets are not interfering in these engagements. Conflicts are likely in the marital life of a parental figure in 2016 and will linger for quite some time. Love life for the Pisces zodiac sign is influenced by Mercury over short duration.

When planet Mercury is retrograde in 2016, romantic activities for the Pisceans are in the back seat and there will be no progress in relationships. Your self-assurance will be low and hence your decisions on love matters are likely to falter. Major decisions on marriage or divorce should be taken at a more appropriate time. Relationship with your soul mate is skewed and it requires all the skills to keep the relationship afloat.

The 2016 love horoscope also warns that the Pisces in love will have the unstinted support of your friends in all matters of life. From May to October, their guidance may be faulty due to the planetary retrogrades and you have to evaluate the suggestions before acting on them. 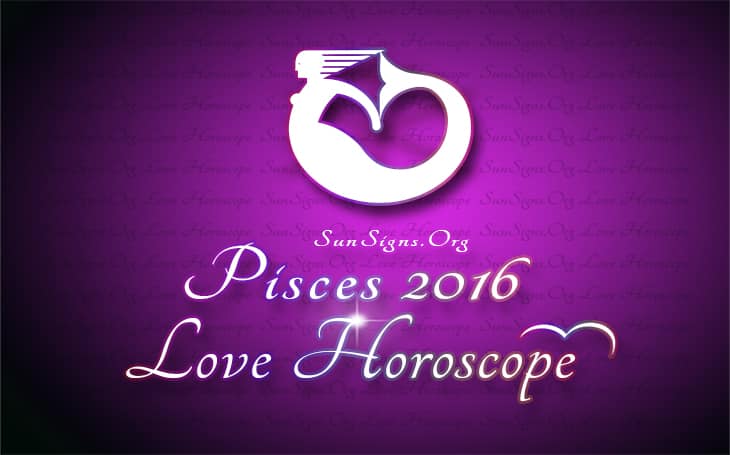 The Pisces relationships will be excellent during the last part of January 2016, and you can have an enjoyable time in the company of friends on exciting trips. During April 2016, family atmosphere will be delightful and you will have the support of family members in all your projects.

In June 2016, you will help others to get into love partnerships and you should stop thinking and start acting on romantic opportunities. July 2016 should be used by the Fishes for expressing your romantic feelings to their love partner. In August you will be deeply involved in matters of affection and try dating different people.

2016 Marriage Predictions For The Fish

The Pisces 2016 love astrology predictions forecast that your attention will be on money making in the month of May 2016 with no time for romance. But it will be suitable for forming relationships for singles. Married Pisces couples will have pleasant time with their spouses and can even think about getting pregnant.

May 2016 is ideal for finding a romantic partner for single Pisces, while married couples will have a harmonious and romantic existence together. They can also think of expanding their family during this period. If you have children, you will have excellent rapport with them.

In love affairs you will be able to attract soul mates with your sex appeal during the months of March and April 2016.

It is time to fantasize about love and be intimate with your partner sexually in bed in October 2016.

June will be a difficult period for Pisces friendships. There will be misunderstanding between family members. You should avoid confrontations and put off dialogue with your lover on major issues. For married Fishes, life will be exciting and romantic in the month of July 2016, and by end of the month the relationships might become frosty and unpleasant.

To conclude the 2016 Pisces love horoscopes suggest that friendships and romance will bloom in the latter part of November and December 2016.

Keep a look out for love 2017 horoscope for Pisces.